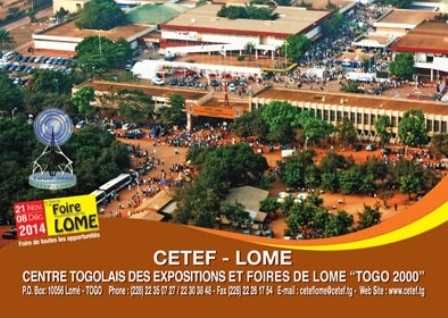 As Africa Top Success announced it ealier, the 12th edition of the International Trade Fair of Lomé will be held from 21st November to 8th December 2014. The biggest commercial and business meeting of the country innovates this year with training for exhibitors. According to a communiqué from the Togolese Center for Exhibitions and Trade Fair (CETEF), this training aims at equipping exhibitors so that they can take advantage at the most from the fair.

On 27th, 28th and 29th August 2014, the Togolese Center for Exhibitions and Trade Fairs (CETEF), promoter of the 12th edition of the International Trade Fair of Lomé, will give training to the media partners on the capacities for profitable participation in this international meeting. This meeting will allow the media professionals to go beyond the simple classic media coverage.

The CETEF will organize a similar training on 28th and 29th August 2014 this time towards economic operators.

We should note that the 12th International Trade Fair of Lomé will be coupled with the first « International Renewable Energies Trade Fair » that will be organized from 21st to 26th November 2014. Exhibitions over all technologies regarding renewable energy, colloquiums, partnership meetings and spaces of demonstration are in the program.