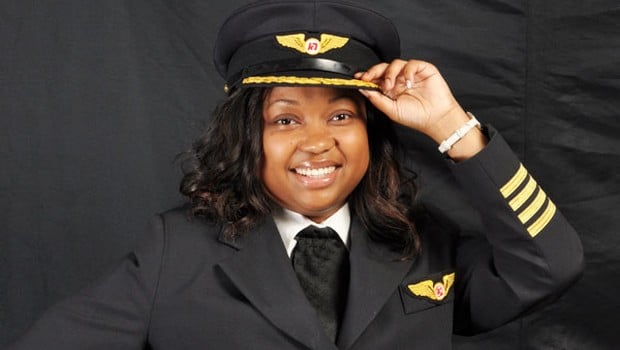 The Kenyan pilot, Irene Koki Mutungi, has no cause to be envious of her male colleagues. Chief pilot, she is the first African woman captain in the air transport history. Daughter of a father pilot, Kiko has fed since her childhood the ambition to succeed to her father. She is a captain today and flying a Boeing 787 for the Kenya Airways airline company.

The sky has no secret for her. Very young, Irene Koki Mutungi admired his father flying Boeings. Her passion for the sky brought her to opt for the career of her father.

“I started flying in 1993 during my first courses in piloting. I remember having flown with my father in London when I was eight years old and I was sitting with him in the cockpit during the entire route. Since then, I realized that it was what I was expecting to do”, she indicated.

I order to achieve her goal, the Kenyan benefited from the support of his father who is today proud of her.

At the age of 17 years, she began her training at Oklahoma City flight school in parallel with academic activities. “Every six months, I pass through a very rigorous training. And I think of putting back that. During the training, we were given any sorts of lessons concerning emergency situations, by exposing us to difficult scenarios for which we can possibly intervene when we are in commands, and we are adapted to the way of facing it”, she indicated.

In spite of problems met during her training, Kiko managed to go through the levels. Far from having complexes, she maintains a cordial relation with her colleagues. “I feel at ease in what I’m doing, whether it is during late working hours, days off and my working hours, everything goes well for me. I cannot work in a structured environment, although air transport industry is structured in its own way”, she explained.

This model for African youth does not dream of leaving aeronautical sector even during her retirement. As her father (today consultant), she hopes to spend the rest of her days managing air transports.