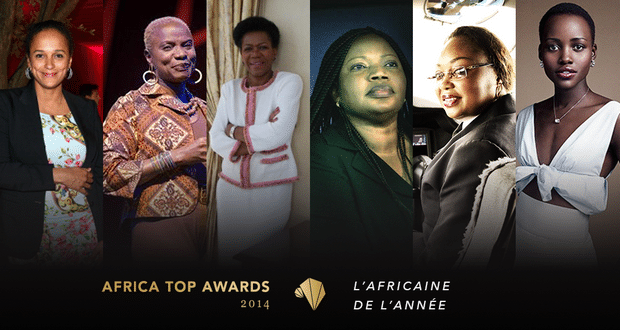 Africa Top Success Awards: Vote for the African woman of the year 2014

« The African Woman of the year » is one of the most prestigious categories of the first edition of Africa Top Success Awards. It includes the most influential African feminine personalities who enjoy a great successful experience in their respective domains (economic, cultural and sports). As for all other categories, the prize of the African Woman of the year will be awarded to the candidate who will have collected the largest number of vote from the readers.

Who will be elected the African Woman of the year 2014?

Isabel Dos Santos holds a share of 25 % in Unitel (a participation estimated at one billion dollars according to Forbes), one of the two mobile telephony networks of Angola. She also holds a share of 25% in Banco BIC of Angola for 160 million dollars. In Portugal, she holds about 15 % in ZON Multimedia, a company of cable television in the list, and a little less than 20 % in Banco BPI, one of the biggest highly-rated banks of Portugal. Isabel Dos Santos also has shares in the Angolan company of cement, Nova Cimangola16, a company of which her husband is a board member.

Many of her songs have topped for a long time the world hits as Agolo, We We, or Batonga. BBC includes her in its list of the 50 icons of the African continent, and for Time magazine, she is the « First African diva« . Guardian completes the chart by making her appear in its ranking of the most influential 100 women of the world.

Daphne Mashile-Nkosi (55 years old) is at the head of Kalagadi Manganese, a company specialized in the manganese exploitation. The production capacity of her company is estimated at 2,3 million tons. Daphne Mashile-Nkosi intends to reach 12 billion rands of turnover in 2014 with a staff composed at 50 % of women.

Elected a legal adviser and a deputy public prosecutor at the International Criminal Tribunal for Rwanda (ICTR) in Arusha, she gets to like the international justice. In 2004, the Gambian jurist was elected assistant general prosecutor of this jurisdiction in charge of judging the authors of genocides, crimes against humanity and war crimes by the member states of the ICC.

The Kenyan pilot, Irene Koki Mutungi, has no cause to be envious of her male colleagues. Captain, she is the first African woman captain in the history of the air transport. Daughter of an experienced father, Kiko has been ambitious since her childhood to succeed to his father. She is a captain today and flies a Boeing 787 for the Kenya Airways airline company.

The Hollywood star has not stopped walking off with all trophies and distinctions since her Oscar last March. On 7th June, she won the trophy of the personality of the year at the prestigious MTV Africa Music Awards (MAMA) in Durban (South Africa). Before this distinction, Lupita Nyong’o was elected the world most beautiful woman by the People magazine. The Kenyan actress was also announced in the shooting of the movie, Star Wars 7.