dernières nouvelles
Accueil / Awards 2014 / Africa Top Success Awards: Who will be elected the African actor of the year? 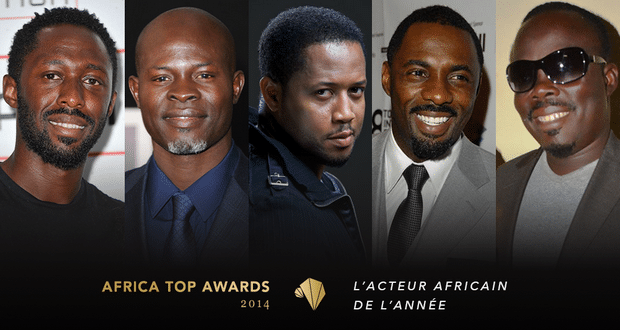 They seduce the African televiewers all over the world. Some have more impressive career path than others but they all have a common point: the impact of their actions on the development of the African cinema. In, fact they are the nominees in the category of the « Best African actor of the year » for the first edition of Africa Top Success Awards. Thomas Ngijol (Cameroon), Djimon Hounsou (Benin), Mike Ezuruonye (Nigeria), Idris Elba (Sierra Leone) and Mahamadou Tiendrébeogo alias Souké (Burkina Faso) are competing for the title. Africa Top Success Awards: Who will be elected African actor of the year?

He draws attention with his new movie entitled, « Le Crocodile de Botswanga » (The Crocodile of Botswanaga). A caustic comedy on the African autocrats and the Françafrique realized by his friend, Fabrice Eboué. Thomas Ngijol was known of the general public with the Jamel Comedy Club. He was born on 30th October 1978 in Paris. He is the son of Gilbert Ngijol, a Cameroonian sociologist, and Crescence Ngijol, a nurse, fervent Christian. He spent his youth at Maisons-Alfort in Val-de-Marne in the region of Paris.

The Beninese star of Hollywood, Djimon Hounsou, realized 2014 a movie about « King Béhanzin« , a Beninese and African history famous figure (1845-1906). Djimon Hounsou belongs to the list of these African actors who emerged in Hollywood. He was born on 24th April 1964 in Cotonou. And he is known all over the world thanks to his roles mainly in Gladiator, Amistad, Blood Diamond, The Island or Never Back Down.

He is a part of actors the most requested by Nollywood. From the simplest roles to those of the main actor, everything fits him a glove. He is Mike Ezuruonye, a Nigerian star of cinema with an impressive physical appearance. During the recent « City People Entertainment Awards » that took place on 22nd June 2014 at 10 Degrees Event Centre (Lagos), he won the prize of the « Best Actor of the year« .

Elba got the heavy responsibility to embody the first Black president of South Africa, Nelson Mandela. The British of African origin, unknown of the public for a long time, has quickly become famous and could be the first Black to embody the emblematic James Bond. Born on 6th September 1972 in London from a Sierra Leonean father and of a Ghanaian mother, Idris Elba started his movie actor career in the British soap opera, Family Affairs, then in the successful television series, Ultraviolet.

He is known through the Bododiouf series shown by several African television channels in the 2000s. He is back but this time, behind the cameras. The Burkinabe comedian Souké of his real name, Mahamadou Tiendrébeogo, realized in 2014 « Ça ou rien » (No alternative), his very first movie. Mahamadou Tiendrébeogo evokes in his full-length film, a topical phenomenon. He takes a critical look at the attitude of the African girls who are ready to pay anything to have a white husband.