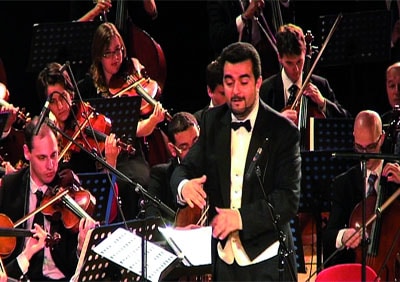 Amine Kouider is the worldwide Algerian famous conductor. He was the founder of the Symphony orchestra Algérie-France. This music lover lives only for his passion, the opera.

« To be a Conductor, it is at the same time being a musician and a man of the theater. We work on the body and energy. We are the intermediary between the creator and the interpreters », he liked saying.

Amine Kouider is a little bit as an a conductor  of modern times with several strings to his bow: a violin in his right hand, a baton in his left hand, a piano on his knees, a telephone hunging around his neck and an overnight bag at his back.

He also wears several hats: he is teaching violin in Parisian suburb, he is art director of the international philharmonic Chorus for UNESCO, he is a freelance work leader for Romania or Qatar, he is the founder of the Algérie-France symphony orchestra…

Amine Kouider was urged to make violin by his parents, music lovers of the middle class. He was registered at the academy at the age of 7 years. – He was born in Algiers in 1967-

Talented, he became the opera youngest violinist of Algiers. He settled down in Marseille at the age of 20 in 1987, then in Paris where he followed studies in orchestra management at the Academy of Marseille and Paris. He continued them at the Royal Academy of Copenhagen. At the same time, he obtained a Bachelor degree in musicology.

He then settled down in Saint-Petersburg. In 1999, he became during two seasons the assisting leader of Valery Gergiev at the Mariinski Theater, at the Festival of Baden-Baden and at the Philharmonic orchestra of Rotterdam. « My good memory of the greatest concert, it was over there, when I managed the orchestra at the same desk as Prokofiev and Tchaikovsk! »

It was during these three years that he knew he had to become the complete manager in order to make a success in his domain. Setting up a project, mobilizes talents, manages people, finances, marketing, politics… « A leader is an entrepreneur and a company is a partition! »

He excelled himself as no other in mixing often western classical music and Arab traditions. “Les Mille et Une Nuits d’Offenbach” for example or sufic songs on the « Neuvième Symphonie de Beethoven« . « Amine conceives his concerts as a dialogue. And his Arab origins are fundamental in his inspiration.«

It was in 2012 that Kouider thus also founded the Algérie-France symphony orchestra to celebrate the fiftieth anniversary of the independence of Algiers. « Before, in 2001, he helped to open again the opera of Algiers, and he managed the national Symphony orchestra until 2008. He was also appointed, from 1998 to 2004, as a music director of the International Orchestra of Paris under the supervision of Ministries of Education and the Foreign Affairs

His career was not easy, he said: « I know whom I am. Oriental, western, Arab, African and Muslim. I leaned on my double culture. Music helps not to be afraid of others, even if it does not change the world. »