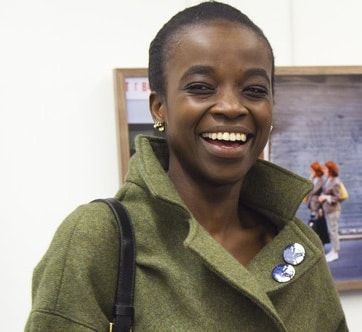 Anna-Alix Koffi, 34 years old, likes photography, the risk and she still believes a lot in the print!
At thirty years old, the one who described herself as a « Parivorian » launched her own photo magazine, without financing, without Web support and without advertising at first!
She recognized it: « I believe I am a little bit crazy to launch this business! »
“Off the Wall” was a great success. Anna-Alix Koffi cumulated posts: founder, editor-in-chief, artistic manger. « I have an eye, but my female collaborators are great sources of knowledge”

Every quarter, she prints one thousand copies of a magazine which includes hundred and ninety pages with every time the strong will «to reveal the emergent picture and show undiscovered pictures « .
Anna-Alix Koffi was trained in history. At 22 years old she drafted her master’s essay.  « Her picture appeared in advertisements in Ivory Coast between 1956 and 1978”. Ivory Coast is her native country which she left at the age of 4 years old further the death of her father who was furniture supplier to civil services. “It is from my mother who brought me up that I keep my struggling side. She taught me that everything was possible. “And she quickly proved it and during her studies, she was a waitress in a 4-star hotel where she regularly met the designer Michel Klein who decided to recruit her for the communication of his new shop. Nothing worried Alix.

She finally chose journalism and she participated in 2012 in the launching of the photo magazine “More”. Very quickly, she wanted to issue her own, “Off the Wall! » “I started photography with fashion magazines during the brilliant times of top models in the 1990s, she remembers. I also liked the pictures that look like paintings. I began with vintage! I often ask myself what the story behind the picture at which I look could be. And I like aestheticism. »

She is getting ready to bring out the third publication about which she knew it would be economically important for the continuation of her adventure: « After the two first publications warmly welcomed in the area, I have to show my seriousness with the third one with the hope to reach my financial balance. I made much noise at “Paris Photo” in November, I rushed into Istanbul just after, then in New York, and now I stop little. »

Anna-Alix likes shooting photographs too. With an Olympus camera or via the smartphone application Hipstamatic, she takes pictures of people on the beach; a nice opportunity to Paris with her 10-year-old son, Paul-Kofi.
The French-Beninese visual artist Dimitri Fagbohoun  » is full of praise towards her: « she reminds me of a creator from “start-up”: persevering and impatient. It is a « digger »: she searches deeply in her mind and propose novelties in an overloaded environment  »
Anna-Alix Koffi has started speaking Japanese since the age of 15 years.

Anna-Alix Koffi said herself « Parivorian« , as at the same time profoundly Parisian and Ivorian. In 2014, she intended to make a tour the center and the North of her native country.
« Africa is however really present in « Off the Wall ».  It is also my identity « .
Anna-Alix works with the Olympus camera or via the smartphone application Hipstamatic. She also likes taking pictures of her 10-year-old son, Paul-Kofi. “But I prefer putting forward others, for respect to their talent. And because if I really put myself in it, I will devote all my time to it and I risk dropping down the magazine!