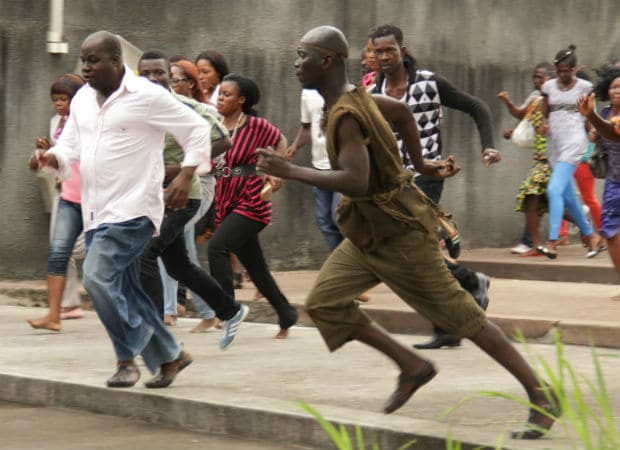 The French-Ivorian director Philippe Lacôte presented last week « Run », his first full-length film at the 67th Cannes film festival in the category « Un Certain Regard« . The political crisis which shook Ivory Coast these last 10 years was recalled by the director with actors who embody political personalities of that time, even if the film-maker refuses to admit it. The production of the full-length film received the supports of the Ivory Coast government, represented at the Festival by the Minister of Culture and the Francophony, Maurice Kouakou BANDAMAN and Mrs Affoussy Bamba-Lamine, Minister of communication.

Ivory Coast and Benin are the countries chosen by the director to shoot the movie which theme is always topical. In an interview granted in France 24, Philippe Lacôte evoked the reasons which motivated a production on the Ivory Coast crisis even though wounds remain to heal.

« The Ivory Coast crisis is still an ardent and sensitive subject. A lot of people lost members of their family there and waking up all this was not simple. But I did not want to make this movie 10 years after the conflict. As film-maker, I am interested in shooting in hot setting, with actors having known this recent page of history. I wanted to be as closely as possible to this past », he declared.

Contrary to what we could imagine, the movie has not for purpose to reconcile Ivorians. For Philippe Lacôte, this role rests with politicians of his country. The movie, according to his director, helps to think about the origins of the crisis in order to prevent such situations.

« When a country as ours hardly came out of war, artists have witness’ role to be played. In terms of moral responsibility, it does not belong to me to arouse useless angers, but I did not make this movie to reconcile Ivorians. Now, I give way to politicians to take care of the vast reconciliation work site », explained Philippe Lacôte.