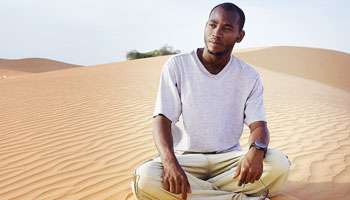 He is very discreet; they rolled out for him the carpet to recruit him in the United States or in Asia to exploit his computing engineering.

African, he was born, African he will remain. « I do not have cash flow problem. My occupation is a business of today. I always have enough to live, even much (…) I like Africa, its immensity, its environments. I like being with my people. I shall leave the continent for nothing in the world… maybe except for a woman. Here, everything is to be started again ».

The Togolese has been currently working for a multinational in Nouakchott for four years, but he planned to come back to Lomé this year 2014. He declared to « Jeune Afrique » magazine: « when Canon Mauritania contacted me four years ago, I told them that I would make the job interview in Nouakchott »

The work, servers’ breakdowns do not frighten him. It is his routine work. He imposed himself such the way he is with his look which sometimes disturbs. No suit and tie requirement: « I answered them that it is my knowledge that mattered, and they dropped. »

He was almost born with the passion of computing. At the age of 10, he used for the first time a computer at one of his friends whose father was an IT specialist. At the age of 16, he was introduced by his half-brother of twenty years old, his elder brother, who was just recruited by a Pan-African bank as IT manager. After his high school certificate, Christian left for studies in Ghana where he read for a Master degree in IT engineering in Kwame-Nkrumah university of Accra.

After this diploma, he linked with a graphic designer’s training to complete his CV. He did not note the terrible motorcycle accident of which he was a victim which cost him three months of coma. Miraculously cured person, he was more determined than ever to succeed.

« On my return to Togo after seven years of studies, I could have worked in the company of one of my uncles or asked my father for a loan in order set up my own business. But I wanted to discover the world and to be independent. »

He knew that he has a promising future. And he has several projects of which that of opening a computing school, train young people. He started dreaming: « I hope that at the 45 years, I shall be consultant and my school will move alone. At this moment, I shall have become a model for the youth. And maybe that will, even modestly, contribute to dissuade young people of emigrating into Europe, into Asia or into America. »

Togolese in the skin, we tell you…