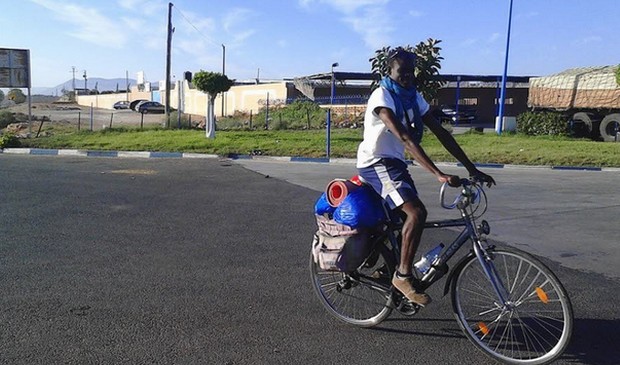 Mission accomplished for the Beninese athlete, Carlos Bossouvi. Remember that this young cyclist had decided since 10th August 2014 to join the city of Jarcieu (France) by bicycle departing from Cotonou (Benin). In 45 stages, he covered 6473 km as for mission to collect 6473 euros for Jar’nati association. « Cotonou / Jarcieu by bicycle / 6473 km! Carlos Arrived! Wonderful! The collection continues! » It is in these words that the site devoted to the challenge of the young Beninese announced his arrival in the French city.

Africa Top Success reported that Carlos Bossouvi denounced the administrative red tapes that blocked a truck of Jar’nati association by the Beninese customs, a truck forwarding foodstuffs to the needy populations. He decided to join the cause of the non-profit organization by contributing with what he can do the best; cycling.

« Personally, as Beninese sportsman, I want to contribute to it by travelling by bicycle to Jarcieu (France) that is the head office of JAR’NATI Association. This route of more than 6473 km is my way of recognizing their work and showing that Beninese wish to encourage the international solidarity. By going to meet them, my purpose is to support these associations so that they continue their cooperation in spite of the difficulties and the administrative obstacles and so, to collect donations both at national and international level in order to strengthen the work of JAR’ NATI association« , he indicated.