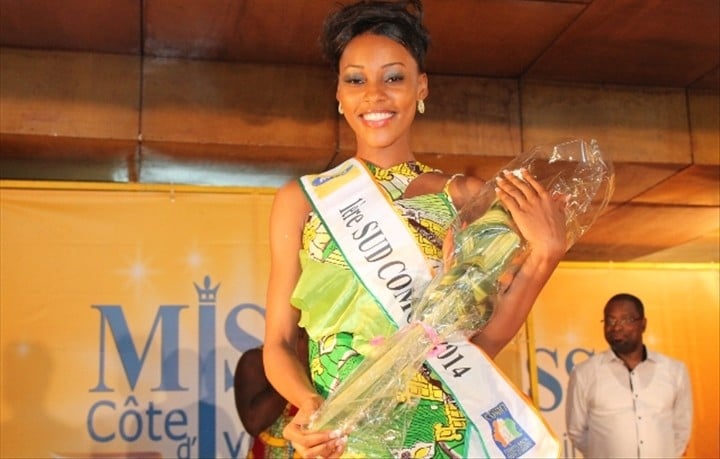 Her beauty and her perfect measurement are taking precedence on her qualities of big athlete. Cynthia Kragbe (Taekwondo black belt 3rd DAN), the French-speaking world champion in 2012 abandons the tatami for evening dresses. The young 20-year-old Ivorian made a commitment in the competition for the most beautiful girl of Ivory Coast and offers himself all chances to win the title on the coming 7th June during the final.

Cynthia Kragbe to be elected Miss Côte d’Ivoire 2014 on 7th June in the evening will not surprise those who know her. The athlete of Ivory Coast can boast her beautiful shape and her intelligence that make of her one of the favorites of this annual competition. With 1,73m for 50 kg, she hopes to realize on the beauty field the exploit already made on the sports level.

During the preselecting phase, Cynthia Kragbe who positioned herself in the Region of Sud-Comoé validated his ticket for the final by ending at the second position.

On the Facebook page dedicated to her, the student in 1st year of Sociology at the University Félix Houphouët Boigny of Abidjan calls her fans to vote for her.

« Thank you all for this mobilization. The way is still long ahead but thanks to you we shall get the victory!! God blesses you all!! I need your prayers and especially your VOTES!!!!! The candidates are very attractive and I can only win with you by my sides », she published.

Born of a father athlete (Black Belt 4th Dan, National Instructor and Technical director of the Marcory League), Cynthia Kragbe has been practicing Taekwondo since the age of 7 years old. Member of the INEKA club of Kouassi, she was champion of Ivory Coast 7 times from 2007 to 2013.