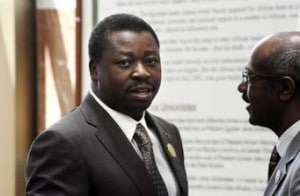 Faure Gnassingbé: the Togolese president won the of Peace Trophy 2013

The Peace Trophy 2013 was awarded to the president of Republic of Togo, Faure Gnassingbé.

This prize was awarded by the foundation Issa Hayatou – chairman of Confederation of African Football after a vote of NGO, famous sportsmen and African media.

« As UEFA and FIFA are already doing it, the peace prize is thus awarded to any African guided by his actions for peace in his country, beneficial in his sub-region and in quite whole Africa », declared during the press conference on 9th April 2014, the chairman of the foundation, the Ivorian Anoï Niniba.

« At the end of this consultation, a prize-winner was chosen. It is deserving son of Africa who, through his peace man’s vision, his actions for peace, made of his country a reference. This illustrious son of the continent symbolizes present and future of African youth for whom soccer became a mark of struggle against poverty ». And « His excellency Faure Essozimna Gnassingbé, president of Republic of Togo, was chosen to be the prize-winner of peace Trophy edition 2013 », concluded the chairman of the Foundation.

The date on which this trophy will be given to the president is not yet known.

Created in 2009 by Africans and inaugurated the same year by the chairman of CAF, Doctor Issa Hayatou, surrounded by personalities of African soccer at this ceremony among whom General Séyi Méméne, Issa Hayatou foundation has its head office in Abidjan, Ivory Coast and its regional office in Accra. Its main mission is to promote African soccer at the base, to supply sports equipment to African training centers.