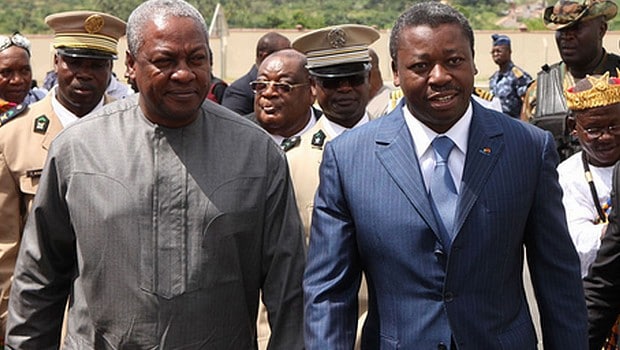 The presidents of Togo, Faure Gnassingbé and Ghana, John Dramani Mahama inaugurated on Monday the juxtaposed checkpoint of Noépé on the border between both countries. Also present at the ceremony, Désiré Kadré Ouédraogo, chairman of the ECOWAS Commission.

The building of this post indeed joins the logic of integration wished by the member states of the regional organization.

‘There cannot be economic community without free movement of people and goods. The juxtaposed post is the example of what must be done’, underlined Mr. Ouédraogo.

For Nicolás Berlanga Martínez, the European Union ambassador in Togo, the regional integration cannot be achieved without the development of the integration of markets that passes through the abolition of commercial barriers, effective implementation of regional policies, strengthening of regional institutions, provision of adequate infrastructures, particularly energy and telecommunications and the implementation of reforms of legislations and regulations.

According to the diplomat, regional integration is one of the essential driving forces for political stability, peace, sustainable development and the reduction of poverty in West Africa.

Financed by the European Union at the level of 7 billion FCFA, Noépé will facilitate customs and commercial formalities between Togo and Ghana.

The works were carried out within the record deadlines and the result is impressive as shown by a movie realized last March.