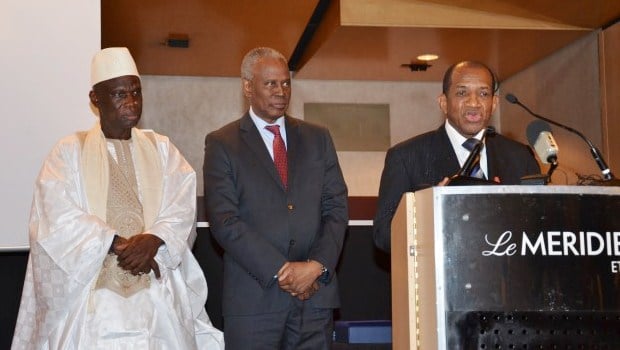 Kabiné Komara: prize-winner of the Oscar for the African Managers leadership

On the occasion of the 21st annual conference of the winning Africa Economic Forum that was held 13th December of this year in Paris, the Oscar of the of the African Managers Leadership was awarded to the Guinean former prime minister, Kabiné Komara (photo with the microphone), current High-commissioner of the Organization for the Development of the Senegal River (OMVS).

The award ceremony of this distinction took place in the lounges of the méridien étoile hotel in the presence of several personalities of the economic sector of the continent.

This distinction was awarded to him by the Supervisory board of the International CIMA-Council of the African Managers.

Mr. Komara dedicated this distinction to the Heads of States of the Organization and to the entire staff of the OMVS system.

Created in 1986 under the name of the African Managers Club, the CIMA has been militating since then for the economic patriotism and the strengthening of the South-South cooperation, for a strong and winning Africa.

It is sponsored by certain former heads of States as Abdou Diouf or Abdoulaye Wade and it counts prestigious members from all over the continent.