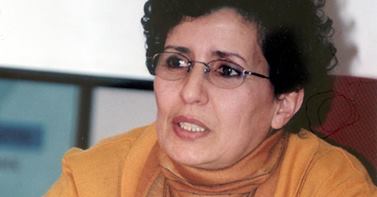 She is a tireless advocate for human rights. And for all her actions, the Moroccan tenacious militant, Khadija Ryadi was honored by the United Nations on December 10, for her commendable fight.

She could not hide her emotion after being bestowed the award in New York.

[youtube]http://www.youtube.com/watch?v=RFR9f1XAHjA[/youtube] “Receiving the 2013 UN prize caused a particular emotion in me, but what I feel most is that I have a new responsibility. We all the Moroccan Human Rights Association (AMDH) members were honored by this award, which meets all the accusations against us. This award is a new beginning, a new commitment. Activism continues. It is also a pride for all men and women defenders of human rights in Morocco. Concerning congratulations to public authorities, I read in the press that of the Moroccan Centre for Human Rights (CMDH). I was not however expecting any manifestation on the part of government officials. «

Khadija Ryadi snubbed the congratulations of King Mohammed VI. Congratulations without « significance, » she said. She preferred to dedicate it to all political prisoners in the country.

Khadija Ryadi is the former president of the Moroccan Association for Human Rights (AMDH).

This prestigious prize is awarded every five years – were also honored this year the Mauritanian Biram Ould Dah Ould Abeid, honored for his fight against slavery, Kosovo’s Hiljmnijeta Apuk who defends the rights of little size people, the Finnish Liisa Kauppinen, Emeritus president of the World Federation of the Deaf, the Supreme Court of Mexico and the Pakistan’s Malala Yousafzai, victim of an assassination attempt when she fighting for the education of girls.

Ryadi was born in 1960 into a family of Taroudant. In 2007, she became head of the AMDH and served two terms before giving her chair in May 2013 to Ahmed El Haij.

Her balance sheet is summarized by Jeune Afrique: having placed the claim of secularism and the defense of individual liberties in the heart of the action of her organization. Under her leadership, she was open to « de- fasters” of Ramadan, the pro-abortion activists and protesters against the February-20 Movement. ‘

In April 2013, she confided to humanity: « On human rights in Morocco, we hear a lot of talk. We present Morocco as a unique model of progress in the region. But in practice, we see nothing ahead. Morocco even worse is going through a phase of regression. There are more than one hundred political prisoners, including condemned to heavy sentences. Torture continues to be practiced. The press freedom has declined to the point that Morocco is ranked behind Libya. Even on equality between women and men, Morocco is misplaced. You see! «

Free and committed woman, she was never afraid to say what she thinks: “Morocco has yet multitude of regions that contain natural resources, but they are not equitably redistributed to the people. (…) The Moroccans call for a sharing of wealth. (…) The State must reform education so that all girls can go to school instead of work. The Moroccan public education is bankrupt. For years the unions expressed criticism in vain. Whenever a Minister of Education arrives, he messes everything his predecessor did, saying that he was incompetent. And as a result, billions are invested into the education system, but it came to nothing. The quality of education has deteriorated. Many children leave the benches of the school early. Morocco is still unable to end illiteracy. More than half of Moroccans cannot read! «

Khadija Ryadi knows she still has a lot to do to attain her ends…
Read also:

Ousmane Sow: a Senegalese sculptor at the “Beaux Arts” Academy in Paris!

Flora Coquerel: Miss France 2014 is French-Beninese … “I’ll remain it for my life!”