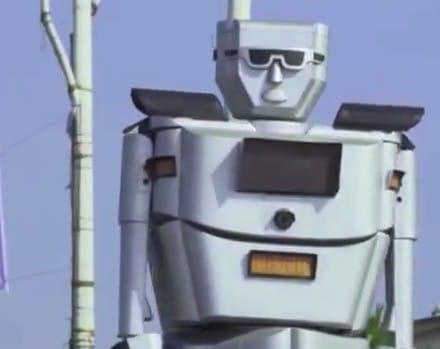 Made in Congo: robots to fight against corruption.

Thérèse Kirongosi is an industrial electronics engineer native of Democratic Republic of Congo. One year ago, she launched in Kinshasa the very first robot capable of regulating road traffic. The initiative was saluted by all and the city of Lubumbashi has just acquired its robot. Kirongosi is praising the merits of her discovery: « There are several robots in the world but the only robot that regulates road traffic is « Made in Congo » particularly in Kinshasa. It regulates road traffic and assures road safety. It turns its thorax as haulage »

The innovation seduced road users who found solution to end road harassments. « Since robot is not a human being, how come it could be corrupted? It is not possible. Robot cannot be corrupted », indicated Kirongosi who advocated for popularization of her robots.

« Made in Congo » robots, according to her inventor, can facilitate life to Congolese population in many domains. « Instead of sending soldiers to war, we can make robots to go to war. We can also use robots in toxic products handling or to sweep streets », she explained. A call is launched to Congolese population to assure safety of robots.