dernières nouvelles
Accueil / Politics / Michelle Obama towards African first ladies: «we should fight for our daughters» 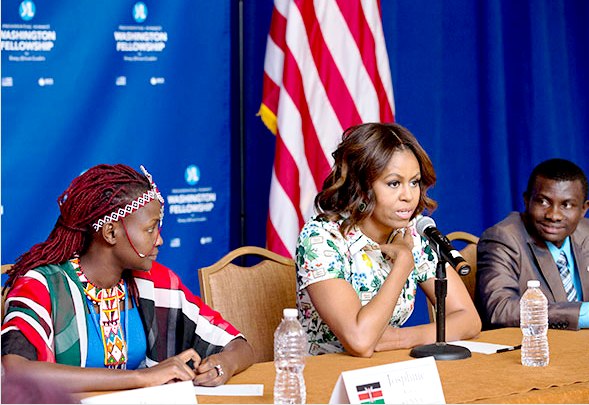 Michelle Obama towards African first ladies: «we should fight for our daughters»

Today, the number of women in the world is higher than that of men.

Educating then a girl is to educate a whole nation. Well, the First lady of the United States understood this assertion.

On the last day of the United States / Africa summit in Washington, Michelle Obama thus invited her African counterparts « to fight » so that girls of the continent can have a better access to the education system.

Education plays an essential role to enable women to manage their own life. It is very important because it opens economic perspectives, access to modern employment and high function being subject to a sufficient schooling and training.

Education also favors woman full participation in the development in the same way as man.

Following to the watchword « Bring back our daughters« , the campaign of support for the Nigerians young girls kidnapped by the Islamists of Boko Haram, Mrs Obama launched towards the First ladies of Africa: « We have to fight for our daughters« .

« No girl in the world should be afraid of going to school. This should seem unbearable to us« , she supported during a discussion with Blanche Laura Bush, the wife of George W. Bush.