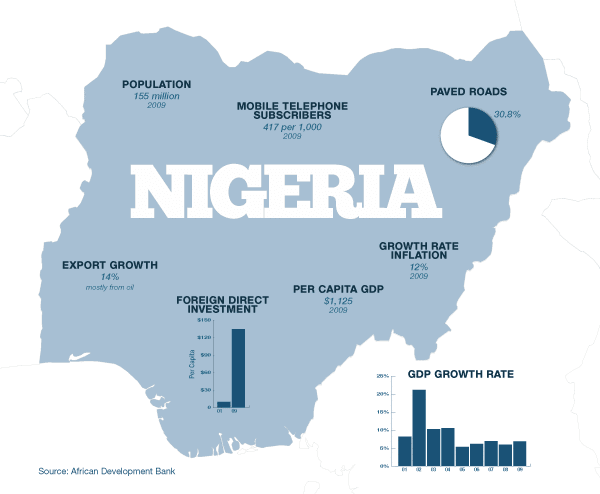 Nigeria is yet to become the first economic nation of the continent, according to the new estimation of its GDP, calculated according to a new method.

Nigeria would so come before South Africa which would stay in front of Nigeria in terms of GDP per capita, infrastructures and governance.

The great majority of some 170 million Nigerians live with less than two dollars a day, and infrastructures continue to be sorely lacking.

According to Dawie Rodt of Efficient Group, based in South Africa, « In terms of infrastructures and management systems, South Africa remains giant far in front of Nigeria. »

Nigeria is the main African oil producer and exporter. It attracts numerous foreign investors in spite of Islamist uprising that is raging in the North.

Nigeria is also the most important mobile telephony market of Africa with approximately, 167 million lines in service according to Nigerian commission of communications.

Another very active sector, Nollywood. The entertainment industry generates 590 million dollars of annual turnover, according to Robert Orya, at the head of Nigerian import-export bank.

Pat Utomi, professor of political economy in the business school of Lagos, reminded: « Nigeria remains a poor country with very severe problems of infrastructures. We should try to transform the enormous available human resources in this country into resources to help reduce poverty and to create employment ».