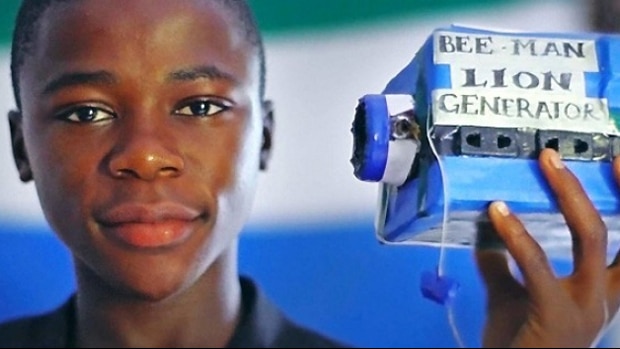 Sierra Leone: A boy of 15 years old supplying energy to a whole village with a home-made battery

To the souls nobly born, the value does not wait for the number of the years. In Sierra Leone, the young Kelvin Doe (15 years old) draws attention to his invention that is making the happiness of a whole community. In his small village at the bottom of Sierra Leone, the little Kevin, while he was only 13 years old, invented a battery to light his house. The invention was worth to him a travel to the United States in one of the most prestigious universities of the world.

In order to reach this stage, the teenager was simply satisfied with collecting wastes from trash cans. He got the ingenious idea to add to them a little soda and some metal and the result of the mixture is more than impressive. Today Kelvin Doe supplies energy to all his village with his home-made battery.

In 2012 he participated in the « Innovate Salone » competition that rewards projects that satisfy the need of communities. He was selected and invited in Massachusetts Institute of Technology (MIT), one of the most prestigious universities of the USA. Kelvin Doe moreover got the honor to meet President of the Harvard University.

« He will soon be among the residents of the MIT within the framework of our initiative of international development and a guest of the Harvard Engineering School. He will acquire more practical knowledge in order to be able to help his community« , declared David Sengeh, promoter of the « Innovate Salone » competition.