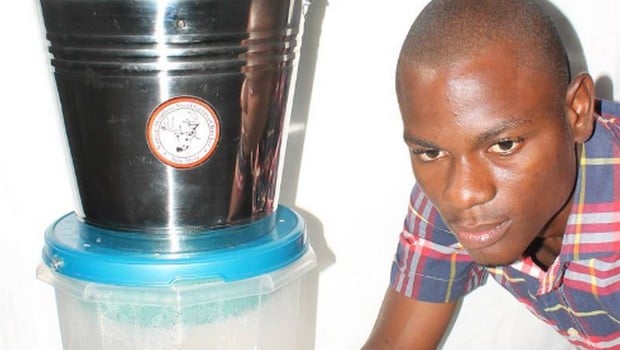 Togo: Akpalo-Lado for the building of an innovation center

The young Togolese, Eduard Akpalo-Lado, the inventor of the machine to extract palm oil, Merlinox at only 17 years old, has militated for the freedom of technology in Africa with his new concept of « Free Technology in Africa« . He pleads for the building of a Research center for Invention and Technological Innovation in Africa which will allow the continent to solve its technological problems.

Eduard Akpalo-Lado is 23 years old. Second year student in electro mechanic of BTS (two-year training degree) at the Institute of Industrial Engineering Training (IFGI), he registers to his credit about half-ten useful inventions for the continent.

As Africa Top Success reported it earlier, Eduard Akpalo-Lado invented Merlinox, the product which is not yet on the market, is made out of recycling objects. It will be shown to the public for its first time during the edition 2015 of the FemaleTechCamp which will be held from 25th to 28th March 2015 in the Togolese capital town.

The young Togolese aims being unifier with his ambitious Research center creation project for Invention and Technological Innovation. For the latter, the new IT infrastructure should participate in the awakening of minds and the creativity in the young researchers of Africa.

In order to achieve his goals, Eduard Akpalo-Lado calls for fund raising towards goodwill people and the African Diaspora in particular. « The nature abounds with many secrets that constitute our pride; it is our turn to discover them« , the young inventor always says.

Other inventions by Eduard Akpalo-Lado

ARARICOMAX: the machine to hull beans, peanut and soya.

ORIRELAXER: the machine to mix and squeeze coconut for the extraction of the coconut oil.