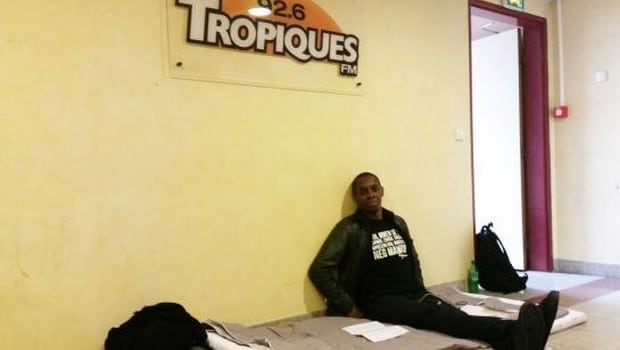 The presenter of the radio program « Couleurs tropicales » on RFI and co-owner of the Tropiques FM Radio station started a hunger strike a week ago.

The former interministerial delegate for the equality of opportunity for the Overseas French people stands against certain practices of Stephane Mouangué (also shareholder of the Tropiques FM radio station).

The man, known for his commitment for a better Africa, considers that the behavior of his partner, Stephane Mouangué, « distort » the values embodied by his radio station.

The radio station that is already losing it advertising clientele and partners, is also about to escape from Claudy. He calls on the CSA (French Broadcasting Authority) to settle the case.

Since last 6th May, Claudy Siar has been receiving supports from all over the world. The Togolese Toofan group joined the long list of the fans of the famous presenter. « We support you, Claudy Siar. Be Courageous« , declared Master Just and Barabas on their Twitter account.

Claudy Siar and the dismissed staff of the radio issued an on-line petition. Click here to sign it.