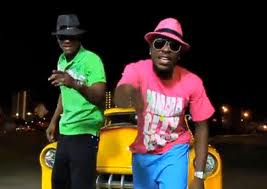 Toofan: the Togolais group that launched the «cool-catché»!

Since 2005, the Togolese group has been surfing on the same wave of success. Western Africa succumbed to « cool catché« . A dance not so simple as it seems with movements of the neck and which requires to move well ones feet, by making them dance according to the imperative logic imposed by the movements of the neck.

The group is composed of two childhood friends: Master Just and Barabas. Master Just (Fatowou Kossivi) has the role of ambianceur of the group and Barabas alias « The Magician » (Blaise Mensah) is the rapper of the group. The group began in three with Allone who left to look for better opportunities in Europe.

The group Toofan, in their turn succeeded in emerging in France, in Germany and in the United States of America, among others.

Master Just: « Ogbragada” frst means, « up ». Our grandparents are used to say in Mina (a local language in Togo): today, I am Ogbragada (Egbéa moulé Ogbragada), meaning, “I am healthy today ». A healthy mother is a woman in whom you can feel life. Musically speaking, Ogbragada is a mixture of the Rap, the Hip-hop, show and a little touch of comedy. »

Barabas: « I thank the Almighty because everything comes from Him. It was He that spoke to us and showed us the right way. All the rest is the fruit of many years work. We experienced many musical genres then, we said why not doing anything based on what our elders done well. There, we discovered that all they created derived from tradition. Then we decided to add the Hip-hop in order to create an African rhythm in general and a Togolese one in particular. And poum, that bit! «

And the duo is full of projects!