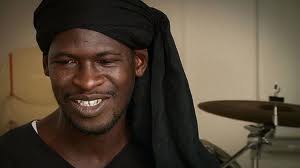 Kane Limam, alias Monza, is a double-hatted artist. This Mauritanian is a rapper-producer. He is also the creator of the Assalamalekoum festival. He is working on two albums and is making the follow-up of about ten artists and several cultural projects.

At 33 years old, this music enthusiast militates via culture to denounce injustice: « in order not to become collusive for it ». He is very attached to brotherhood and to multiculturalism, and he does not hesitate to sing of what he thinks.

It is not for nothing he proclaimed himself “Président 2la Rue Publik” (President of the public street) – title of his first opus in 2004. He adores mixing in his texts Fulani, Wolof or Hassania. “In Mauritania, we cannot assume there are several communities whereas they are richness. Before talking about national unity, we should first accept national identities. Together, we are stronger.”

Kane Lima really got passion for the Hip-hop at the age of 15. He, very soon, made success with his group “African Prodige” in 1998, Monza joined the group Intelligentsia. His second group “Do Re Mifa” was set up. He remembered: “I started singing the Hip-hop at the age of 14. I was interested both in singing and writing; I wrote poetry in French and in Arab. I really began the Hip-hop in 2002, after I completed grammar school with my A Level diploma. I went to neighboring countries to have new musical experiences. The Hip-hop was my favorite music. I thought the Hip-hop was an art capable of transmitting direct and revolutionary messages at the same time…”

Very quickly, he founded a new group with Couly Man, “La Rue Publik”. “If the authorities do not do things well, it is our way of protesting against.”

In his beginnings, he was supported by the businessman Ahmed Ould Hamza and the French Cultural Center. Their first album came out in 2004. It was fully produced in Mauritania but colonel Maaouiya Ould Taya who was on power made remove 1 500 records of the sale. We need more in order to discourage them. Despite the pression, the record was printed out again and the group went on tour through the country.

Monza who became a figure of respect for the youth of his country was also an entrepreneur: he launched his label Zaza Productions in 2008 and by the way, he created the “Assalamalekoum Festival International”, devoted to urban cultures. He was the promoter for the “Assalamalekoum Tour” (writing, dancing and musical creation workshops) as well as the “Assalamalekoum Discovery”, a competition to detect new talents. “Assalamalekoum is not only a festival but also a project intended to train young people and to teach them patience. It helps them to achieve their ambitions the same. By this festival, we succeeded in training hundreds of young people including those who take part in international festivals today under Mauritanian flag. This helped us to know that we do not necessarily need to have support from government before succeeding. I think that only culture can allow people to succeed where politics has failed. Nowadays, art succeeded in solving crises in the world after politics had failed to do so. If sport succeeded in solving problems, art makes young people more responsible.”

Today, he is not jobless because he is managing the career of six rappers and two groups.

He is delighted to see the way behind him in a few years: “none of Mauritanian rappers has means to produce and distribute his own records. An album of good quality requires three million UM and many of us have difficulty in finding a sponsor. Many managers improvised themselves without thinking of being trained afterwards.” “We often organize meetings in order to focus on the future of the business, but always, general interest gives way to personal quarrels. Nevertheless, the situation is not so catastrophic as such for the Mauritanian Hip-hop. There were no studios before. We were satisfied with a Sharp brand double cassettes player radio for recording with all difficulties. Today, we have Studio 308, Zaza production, Mauritanie production, MCO and Dj Mamen, the first to have recorded the Mauritanian Rap.”

Monza has strong convictions around his religious and musical commitment which he wants to make share: « I believe now that Africans in general, and young people of the Maghreb in particular, have to help each other and act quickly to take the initiative to build without waiting for governments to play their role. (…) My themes thus concern cultural diversity, because I am convinced that diversity is the future of this world. I also try to promote a speech of tolerance, one of the most important principles of Islam. As Muslim artist, I believe that the message of the real Islam is tolerance against all calls which try to give an opposite image of what the real Islam looks like, whether it is from radical groups or enemies of Islam who try hard to convey stereotypes about it. I also wanted to show that Islam is a religion of tolerance which accepts other artistic forms, and that religion is a personal relationship between individual and his God, that has nothing to do with other businesses. «

At 33 years old, Monza has a dream: create a “Hip-hop Academy Mauritanie”. And if he talks about, he already knows it will be very soon and it is going to allow dozens of artists to share with him this beautiful adventure.
To be followed.[youtube]http://www.youtube.com/watch?v=WlHTMAIGGhk[/youtube] [youtube]http://www.youtube.com/watch?v=6pYfCDK_fy4[/youtube]