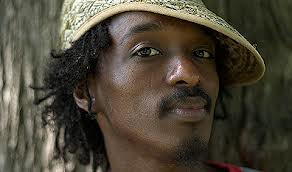 K’Naan: the Somalian rapper who thrills the charming Lupita Nyong’o…

His real name is Keinan Abdi Warsame. He was born on February 1st, 1978 in Mogadishu, Somalia. His stage name K’ naan means « traveler » in Somalian language. « In Somalia, we never put on shoes. We learn very early that we all come from the earth and we will return to it. »

K’ Naan comes from artists’ family: his aunt, Magool, is a singer and his grandfather, Mohamed Hagi, was a famous poet.

His childhood was marked by civil war and hostilities towards Ethiopia. « God protected me in so many times and various circumstances. The biggest protection which I received was to avoid death, but rather to have killed nobody. It is enormous. When you kill somebody, you then carry all his burdens. That’s it my biggest chance. I have friends or family membres who had no choice, and who have killed. »

At the age of 13years old, he left for New York with her mother, his brothers and his sisters. They joined his father, working there as a taxi driver.

The beginning of a dream: his father did not stop of sending him American rap cassettes. « I was one of first ones to have listened to hip-hop in Mogadishu. I was learning the rhythm, the flow, while I did not know about English ». He will become a rapper. « What is important is always the message, the words, what you have to say […] in Somalia, you should not necessarily be a good singer, or to have a good sound, but it is necessary to have something to say. That is what is a good musician in Somalia. »

He lived some months in Harlem before leaving to Rexdale in Toronto.

In 2001, during a concert for the anniversary of the High commissioner for Refugees, he declaimed a slam to the UNO and he was spotted there by the Senegalese singer Youssou N’Dour. He quickly got noticed in Canada, in Africa and also in Europe: in 2006, he presented during the first part of Damian Marley’s Welcome to JamRock European Tour and participated in the festival Paris Bamako in Mali with Amadou and Mariam, M, Oxmo Puccino, Ba Cissoko and Tiken Jah Fakoly. In July 2007, he presented in Nice Jazz Festival. In December 2007, he went to Djibouti with his music bands and participated in Fest Horn (Festival of the horn of Africa).

He was also suggested of becoming an actor. He was proposed in 2010 for the leading part of the movie Dog Pound. After three days of shooting, he gave up and preferred to devote himself to the production of his album. He was replaced by Adam Butcher.

It will be for another time: a few years later, he was still making music and played in the movie Cosmopolis by David Cronenberg with Robert Pattinson. He played the role of a rapper died of a heart attack problem that was transported in an opened coffin through the streets of New York to celebrate him.

The remix of his song Wavin Flag was the hymn for the Soccer World Cup 2010 in South Africa. He was known all over the world.

He joined Nelly Furtado in order to create Nelstar group.

Affection: K’ Naan has already two sons with his ex-wife, the specialist in pharmacy Deqa Warsame. But he would be recently in couple with  Lupita Nyong’o, the Kenyan recently Oscar-winner in Hollywood for her role in Steve McQueen’s last movie, 12 Years a Slave. « They both are passionate by the African questions ».

And the one that we nickname African philosopher asserted: « I am now more clear with what I am, and I know when to clear off […] but I do not think that one day I shall fully know myself. I know my roots and I know my target but my character continues growing. »

Other participations
2012: Chimes of Freedom: Songs of Bob Dylan Honoring 50 Years of Amnesty International. Remake of With God on Our Side of Bob Dylan.