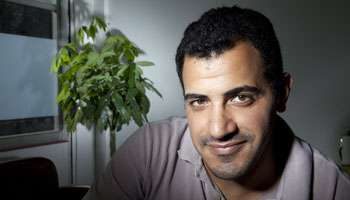 Saïd Hamich: the Moroccan producer that is rising…

He is becoming famous with his production company, Barney Production. Saïd Hamich settled his production business in Paris but it is directed to African cinema which he wants to professionalize.

The performance of Saïd Hamich was not easy, but it is a nice example of success. He was born on August 2nd, 1986 in Fes. Coming from parents of modest origin, he was raised by her mother, a dressmaker. But when his parents divorced and he was obliged to settle down in France in the south-east. He was 11 years old and could not practically speak French. « My first moments were difficult to live and it took me time to accept the fact of being in France, he remembered. Especially with regard to French which was not my mother tongue and which I studied little at school. Well, I arrived in a small village where I was followed in almost a personalized way. I was able to catch up the level over four years. »

Fascinated by soccer, it was due to a friendship story that he got interested in cinema: « I knew nothing about culture; my parents were not concerned by the matter. I did not have an idea of making cinema, but a close friend – the son of the writer Yves Bichet – dreamed about it. This is the way he started to fill himself with movies in an intuitive way ».

After he had completed his high school in 2004, he hesitated to study in sciences but he opted for Sorbonne and studies cinema. He had hard times to survive: « I was a scholarship holder and I worked for the “Centre Pompidou” where I did everything. In the faculty, I built my film-going culture and everything became an interest of study. »

In 2007, he made « La Fémis » – Graduate school of picture and sound business. He knew that he preferred production to the play: « actor? It is not at all in my character, asserted this chaste man. Production corresponds more to me.” From the second year of study, he created Barney Production which logo is a rabbit and with his talent and his audacity he has been producing very fast two or three movies a year!

Drari, produced by Kamal Lazraq, obtained the second prize of Cinéfondation in Cannes in 2011.

He is, at present, working on a movie from which he expects a lot: “Les Lumières de l’Europe” – Boris Lojkine (The Lights of Europe), on African migrants in Morocco. It is announced for 2014.

« I really want to make coproduction with Africa, in particular with Tunisia or Morocco. There is waste of course, but the strategy of subsidy for the local cinematography is often positive in the point of view of picture as well as that of economy »

His dream: to succeed in seducing of course one day Hollywood but also Nigeria and Nollywood, where there is an important flow of production ».

A producer to be followed then!