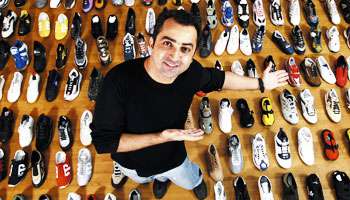 Karim Oumnia: the king of shoes who seduced Beyoncé and Madonna!

Karim Oumnia is a king of shoes! This native of Algiers became famous worldwide. Beyoncé and Madonna adore his collections!

Karim Oumnia is the son of an Algerian state employee, coming from a sibship of eight children.

His adventure started in 1990 in Nancy, France. Karim Oumnia landed from Algiers with a diploma of polytechnic school. He came to take courses in industrial engineering system in the Mining engineering school in Nancy. « It was the training which I always wanted to make, because it is a cross-training. I wanted to touch everything not to lock myself in one way ».

In order to validate his academic year, he had to find a training course. « I sent fifty two application letters and the only single answer I received was negative »

The director of the school urged him not to lose hope and he introduced him to one of his friends, the boss of Promotech, a company specialized in technology transfers. « I suggested him that I would make gain his company ten times more than what my training course would cost him. Six months later, I was far beyond my objectives and I was hired. »

Karim Oumnia seized the opportunity, and he knew that he would like to become his own boss. He registered his first trademark, Baliston. The stars were unable to resist.

« At that time, all brands copied one another and had almost the same look, without taking the risk of innovating. I thus decided to launch alone, what was a matter of madness for my circle of acquaintances ».

In 1998, he presented the lightest soccer shoes of the world. The team of Nancy took them. He sponsored some French clubs such as Troyes, Ajaccio and the national team of Mali.
After the sport, he targeted the feminine market with his Diva model.

In 2003, Jacques Chirac asked him to accompany him for his official visit in Algeria. « I couldn’t believe it. At first, I thought I had immigration problems. »

He also had the idea of anti-perspirant shoes the patent of which he applied for in 2007, he created Glagla Shoes in 2009 and he resold Baliston in 2011.

Today, he is really the king of the shoes with his famous brand, Glagla which is sold on the Internet and distributed in about fifty countries. And it is not all! « I travel to conquer new markets (…). As an engineer, I like the development of products. It is much more alive than the financial management. »

Married, he has two sons and a daughter.

Keen on sport – he played in the Algerian national team of waterpolo – he likes saying: « I did not satisfy myself with a simple stroke of luck. »