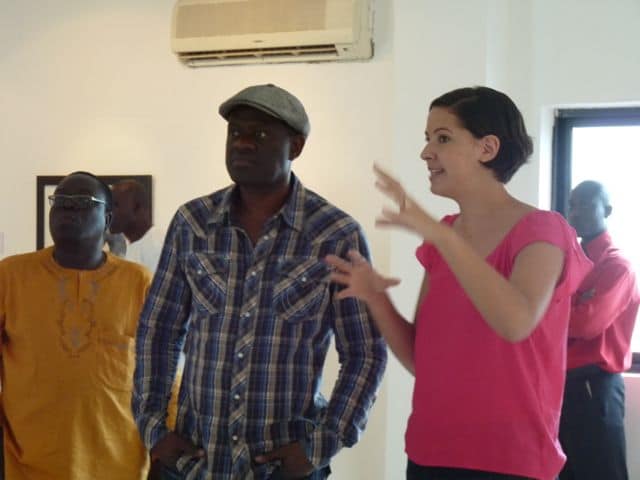 Marie-Cécile Zinsou: she opened the first museum of contemporary art in Benin!

At 28 years old, Marie-Cécile Zinsou, who is at the head of the “Fondation Zinsou”, a family organization which has been working for the promotion and for the valuation of African artistic heritage worldwide since 2005, has just opened on November 11th, 2013, the first museum of contemporary art in Benin.

An initiative very appreciated on the entire continent in a country where culture is very difficult.
The museum was opened in Ouidah, a particularly poor city situated at around thirty kilometers far from the economic capital Cotonou. Its rates of unemployment and lack of schooling are terrible there. « The purpose of the museum is also to light Ouidah in a positive way. It is necessary to talk and to make talk good about Africa; it is a real challenge for us all.”

Marie-Céline Zinsou started with nothing. She remembered: « At first, we were alone. But with four other members of my family, we were all convinced that this project was meaningful. Some people prefer invest their money in apartments, planes, boats … Today, we have strong supports coming from companies and from individuals. We thus received an important help from Sotheby’s for our new museum and from the European Union for our Mini-Libraries. It is true that inthe beginning it was not obvious. I remember that my father, the cornerstone of the whole project, always had the same answer to his detractors: « If you are not interested in our project, you can do anything else, we continue and encourage ourselves (…) We also want to contribute showing the continent as a real actor of the world art and to allow people outside to have another look on this continent which is, too often, under the spotlights only when there are disasters »

Marie – Cécile Zinsou’s life is also amazing as the works she exposes. She is the great-niece at the same time of a Beninese president and a cardinal, a daughter of an influential French financier. Emile-Derlin Zinsou, her grandfather thus, was one of the first presidents of independent Dahomey, which took in 1975 the name of Benin. Cardinal Gantin was « the African who nearly was pope. He was raised with five children of my great-grandfather. »

Marie-Cécile has been hearing about Benin since the age of six years. « Our family was already rejected once from the country. All the men of the family were sentenced to death in absentia in the beginning of the years when president Kérékou got to power. Then, today, we keep for our own the collection we expose, to be able to protect it in case of any problem. »

After brief studies of art history, she made a commitment in 2003 in Benin for the NGO, the SOS Children’s Village International. She lives with children in teaching them English and art history. And she created a first museum. This was when she had the project of creating her own foundation with almost nothing at first. « We opened this museum in one week. We did not want to sell as in a gallery, but to be able to make exchanges of works with international institutions »

She remembered that his father was hostile at the idea of returning in a country which had already rejected her family, but he invested all the same 80 000 euros for the purchase of contemporary works by the Foundation.

In Benin, she had to face some reluctance. Romuald Hazoumé, one of the great artists of the country did not necessarily help her in the beginning: « he received me rather coldly. It is necessary to say that he often has predators’ visits coming from Europe or from the United States which scour Africa to buy works of promising artists cheaper. » Today, he is one of the artists most exposed and known from Africa, and also partially thanks to her.

In the meantime, she noticed: « we are in a country which does not exist (…) Being a Beninese is difficult. It varies that we are from the North or from the South. The interest of children for culture is everywhere the same. It is meaningful to support culture in Africa. »