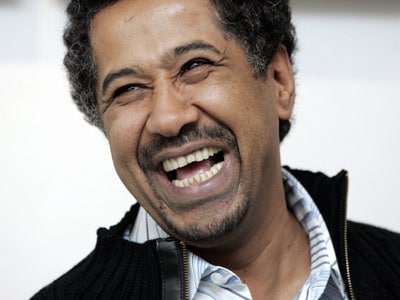 Cheb Khaled: the king of Algerian Raï that has become Moroccan…

He was born Algerian, he will die with both nationalities… Cheb Khaled, the Algerian artist was naturalized by Mohammed VI. Some lines published in the official Bulletin of September 5th, 2013 specified that a dahir (royal decree) of Mohammed VI allowed to naturalize, exceptionally: Mr Khaled Hadj Brahim, born on February 29th, 1960 in Oran, in Algeria. – His parents lived in the district of Eckmühl-

Khaled has always been a goodwill ambassador between both countries.

The prince of Raï was known in 1992 with a worldwide success, « Didi ». He played « Didi » during the opening ceremony of the World cup of FIFA 2010 in South Africa.

Khaled was married to Samira, native of Oujda – the most Algerian of Moroccan estates-. It was she who urged him to militate for this double nationality. The singer reported: « She is very strict for all that concerns the education of our daughters. After the adoption of the law authorizing gay marriage in France, she asked me to return in Morocco and we have just moved. »

« The king of the Raï » is also an old friend of Mohammed VI. They met each other in 1989. During of a musical show baptized « Happy New Raï », the crown prince went in changing rooms to meet Cheb Khaled, then a rising star. They soon got along well.

Of this time, Khaled said: « I was lucky enough to go alongside to the king when he was a prince. Then when he became a king, he did not forget me. Quite the opposite. He did not change and that touched me much. »

Khaled, of his real name Khaled Hadj Brahim (in Arabic: خالد حاج ابراهيم) is known of the general public. He sold more than 60 million albums worldwide.

He was influenced by singers as Ahmed Wahby and Blaoui Houari, the big Sheik of the Oran Song. His masters will be Abdelkader El Khaldi and Mestfa Ben Brahim.

His love life was sometimes complicated: in 1997 his wife lodged a complaint against him for marital abuses, before retracting. On May 7th, 2001, Khaled was condemned by the magistrates’ court of Nanterre for two months suspended prison sentence for « desertion of marital home ».

He got noticed at the festival of Oran in 1985, of which first prize he won. He settled down in France where he managed to impose his music. In 1986, he met Djilali Ourak and Marc Céda. He signed at Universal.

In 1992, the album Khaled, produced in Los Angeles by Don Was and in Brussels by Michael Brook, was a real success. This album went into the list of 50 albums the most sold in France. Khaled sold 3, 5 million copies of records in Brazil!!! The title Didi was the first big success of the Raï.

In 1993, new success with the album N’ssi, N’ssi. In 1994, Khaled received a César Award for the best music written for a movie for « Un, deux, trois, soleil by Bertrand Blier« . The same year, he sang at Garnier Opera!

In 1996, he recorded the album Sahra, collaborated with Jean-Jacques Goldman. The next success, we know it, it is the hit Aïcha in particular. Still in 1996, he sang in duet with Mylène Farmer the Doll. In 1997, he acted in the movie 100 % Arabica produced by Mahmoud Zemmouri with Cheb Mami.

He did not forget music at all. He brought out three other albums, Hafla in 1998 and the album Kenza (of the first name of his daughter) came out in 1999. 2000, new success with « Elle ne peut pas vivre sans lui » (She cannot live without him)!

On October 16th, 2003, Khaled was appointed Goodwill ambassador of Food and Agriculture Organization of the United Nations (FAO).

In 2006, he sang in duet in San Francisco with Carlos Santana the song Love to the people.