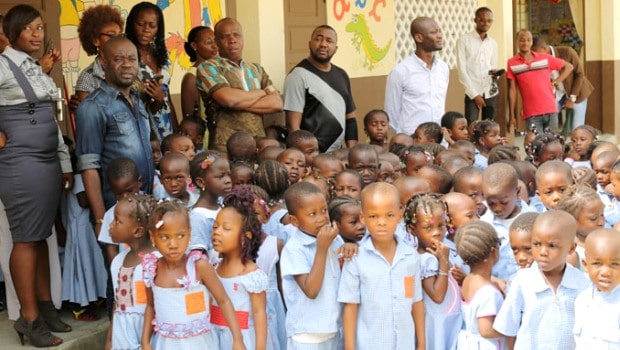 The Ivorian musical group, Magic System, paying visit last Thursday to two schools he offered to the village of Anoumabo in the municipality of Marcory (South of Abidjan) to show their ‘solidarity’ regarding the distress of parents whose children are victim of abduction and murder, calling also for « vigilance ».

As an Ambassador of the United Nations for educational, scientific and cultural Organization (UNESCO) and a human rights Ambassador of Ivory Coast, Salif Traoré alias A’salfo, the lead vocal of Magic System surrounded by schoolchildren, appealed for vigilance from parents, children and especially of the Ivorian authorities.

‘We are here, in the school by Magic System to mark solidarity in front of the distress of parents, whose children are victim of abduction and murder. This is an opportunity for us to launch an appeal. As fathers and parents, we cannot stay without saying anything. This must stop so that our children can grow up and our households be in peace », said A’salfo in the middle of the children of the nursery classes.

Passing through classes, the same message of awareness was given to the schoolchildren.

« If you are approached by people you don’t know, if someone asks you to come and take money or something else, do not accept. These people can take you and run away and you will no longer see your parents. This is what is currently happening in Abidjan. When you leave school, go home’, advised in an easy and accessible language to children, the Ambassador of UNESCO.

Calling out to the perpetrators of these « acquisitive » crimes, he said that there is no need to take life of innocent people, to perform rituals or to sacrifice children before finding ones way out. ‘You have just to work and our case is an example’, reminded A’salfo.

According to the Minister of State, Hamed Bakayoko, 25 cases of children abduction and mutilation are true so far, of which 5 cases of discoveries of mutilated children and 20 cases of corpses.

« We deployed 1500 men among whom 1000 police officers, 300 gendarmes and 200 servicemen equipped with adequate resources to strengthen patrols in some criminogenic areas, water sources, the vicinity of schools, surroundings of cybercafés », said Hamed Bakayoko at the end of an inter-ministerial meeting held Wednesday at his office for an update on the situation of the phenomenon.