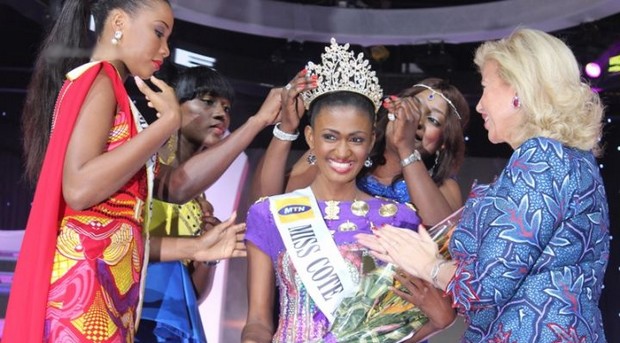 The most beautiful girl of Ivory Coast 2015 is revealed. was elected Miss Ivory Coast last Saturday during the final phase of the competition held in Abidjan. She thus succeeds to Jennifer Yeo, prize-winner of the previous edition of the beauty competition.

Placed under the theme « Peaceful Elections« , the edition 2015 of the national beauty competition Miss Ivory Coast was the opportunity for candidates to send peace messages to the public in prelude to the presidential election of October 2015.

The charming Andréa Kakou N’guessan (22 years old), fourth year student in marketing took the crown away from her competitors. The new ambassadress of the Ivory Coast beauty is surrounded on the podium by Hyllène Légré and Alicia Kobénan, respectively 1st and 2nd Runner-ups.

The native of Yamoussoukro has thus become been the 4th girl to have won prestigious title after her sisters Miss Aïcha Rami, Silviane Dodo and Linda Delon.