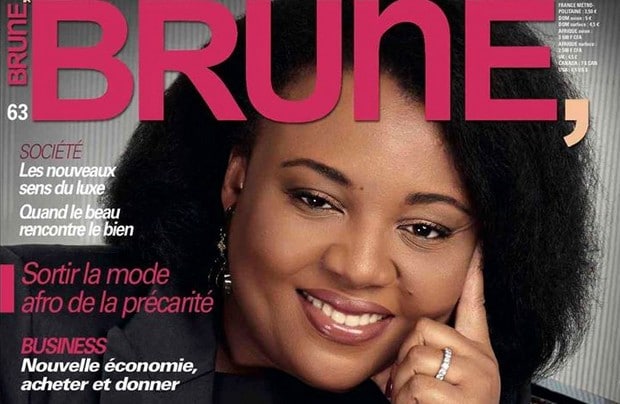 Fatima Beyina-Moussa, Chief Executive Officer of ECAir, Equatorial Congo Airlines, the national airline company of the Republic of Congo and also Chairwoman of the African Airlines Association (AFRAA), is on the front page of the Brunette magazine (June-July 2015).

In this number, she confides to Marie-Jeanne Serbin-Thomas and comes back on her training in France, Canada and the United States, her career, ECAir, the training of young people, the opening of new lines, the hub of Brazzaville, the AFRAA … Extracts of the interview: « Upon my appointment, I have focused on the training of young Congolese specialists of aviation business. »

« We want to bring our contribution to develop a new hub in Africa in which passengers can be in transit, from Paris, Dubai or Beirut and have their access to Brazzaville and from there rool out somewhere else in Africa, and vice versa. »

« The General assembly of AFRAA is an honor for our young company. It is also a strong signal for our country which invests and innovates in airport infrastructures. »

Fatima Beyina-Moussa, the first woman to manage an airline company in French-speaking Africa, will inaugurate the 12th station of ECAir from Brazzaville on Tuesday, 2nd June. After Pointe-Noire, Ollombo, Kinshasa, Douala, Libreville, Cotonou, Bamako, Dakar, Paris, Brussels, Dubai, passengers of ECAir can join Beirut on through flight. ECAir that has already carried about one million passengers, will organize the 47th General assembly of AFRAA from 8th to 10th November 2015 in Brazzaville.