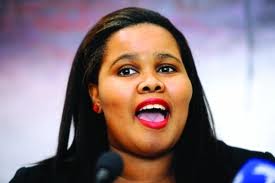 Lindiwe Mazibuko: the thirty-year-old woman who dreams of becoming President of South Africa!

Vigorous woman and full of conviction, Lindiwe Mazibuko does not hide her ambition.

Her rise is judged lightning. In 2009, Lindiwe Mazibuko was elected Member of Parliament for Democratic Alliance (DA) political party in Durban, the largest Zulu town of South Africa. She became well known in Africa.

On October 27th, 2011, she became the vice-president of the biggest opposition party, President of parliamentary group for Democratic Alliance (DA) of South Africa. She was thus the first Black woman and the first Zulu woman to exercise this duty.

She is judged as “very efficient, confident of herself and very good speaker. She is also ambitious.”

For the fact that she is quick-witted, her sense of appropriate expressions and her quality of good leader is appreciated by all and made people forget about lack of experience.

Her policy is clear: « I will be where injustice is, where a strong opposition to government is necessary.  But I shall also know how to give way in the domains where it is necessary in stretching out hand to unite our efforts. I do not believe it necessary to choose between one or the other”, she declared.

Lidinwe Muzibuko was born on April 9th, 1980. She comes from the middle class. She was certified in the University of Cap in South Africa.

President Jacob Zuma, political opponent of Lindiwe Mazibuko but also Zoulou as her, knows that future belongs to her.

All remaining is to know how she will succeed in implementing her dream!