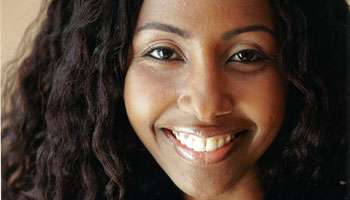 Lula Ali Ismaïl is a young film director about whom we will much hear about.

After she had left her native country ten years ago, she will shoot in October, the first Djiboutian full-length film, Dhalinyaro, three years after the success of her first short film, Laan which evokes everyday life and the hopes of the girls of her country.

To finance her movie, she could only count on herself and on inhabitants of her country: « In Djibouti, there is no facilities where to deposit a file for example; there is no office, nothing. I visited the Minister of Culture. Then, I went to canvass and tap at the door of Djiboutian companies. I got big support from Djiboutian people « .

Dhalinyaro will see the light of day thanks to a co-financing of 800 000 euros by Canadian, French, Djiboutian (160 000 euros) and Senegalese, in partnership with the Organisation Internationale de la Francophonie (OIF).

Youngest child of a sibship of eight children, Lula Ali Ismaïl left Djibouti in 1990 to settle in Montreal where she followed studies in office automation. In spite of her shyness, she did theater and began dreaming of actress’s career: “I fell in, if I can express myself this way. In fact I have been living in Montreal for the last fifteen years. At some point, in order to overcome my shyness, I wanted to register in a drama class. All began from there. I only played small roles in television series in Quebec (…). Then, I had an alternative: either say goodbye to the cinema by changing direction, or create my own role in becoming myself a film-maker.”

Her choice was clear…

In 2011, Lula Ali Ismaïl thus signed her first realization, Laan, a twenty six minute duration also fully shot in Djibouti. She described everyday life of three girls that are friends in khat addicted society where she camped on a woman of her era, independent, in search of the soul mate. “In the beginning, I really did not have precise topic, I returned to Djibouti to find inspiration. I knew that there is a big impact of the Khat on Djibouti society, and I wanted to deal with as a sensitive topic for Djiboutians. It is what served as backdrop for the story of the 3 friends that I covered in the movie. I never direct a movie before and I found myself with 40 people who waited for directives from me. Thus, we learned all together at the same time on the field !”

Her first movie, Dhalinyaro tells the story of three 18-year-old high school girls, coming from different social classes, rooted in their culture but also turned to outside thanks to the new technologies. She made her casting in front of high schools.
Africa looks forward to discovering her movie!
A director who is going to make people talk much about her again.