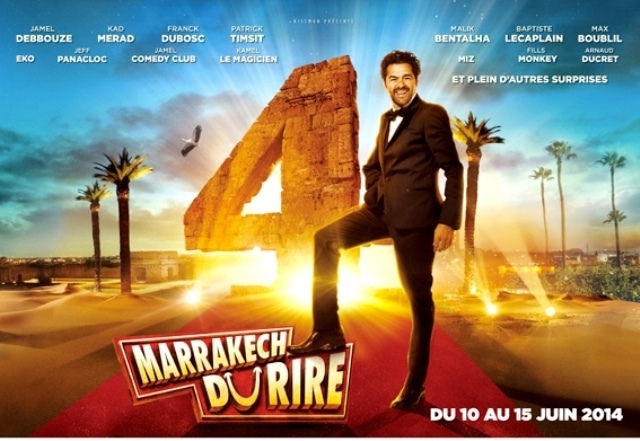 « Marrakech du Rire 2014 »: a competition opened to humorists of the web

Jamel Debbouze and all his team are organizing for the 4th consecutive time, « Marrakech du Rire » (Marrakesh of Laughter) festival in Morocco.

For this year in association with the mobile phone operator « Inwi« , a first competition is dedicated to Moroccan funny podcasts « to give a chance to young humorists of the web« , supported the organizers.

The principle to participate in this competition is simple. You just send a short funny video to the steering committee. The list of the participants will published on the coming 19th May.

The jury composed of the humorist Hassan El Fad, sponsor of the operations, Amir Rouani, Khalid Sheriff and the public will select ten participants.

They will have chance to be together during a weekend in Marrakesh where they will be coached by members of the jury and will receive numerous pieces of advice.

They will then undergo several qualification tests especially based on improvisation themes imposed to them.

Five finalists will be chosen at the end of this stage. They will have to produce a funny podcast that will be shared on the Inwi channel of YouTube and the platform Dahkin.ma.

Throughout May, other numerous videos will be published as a collection of bloopers, reports and interviews.

The results will be published on 11th June in preview of the show of Eko at Badii Palace, in full Marrakesh of laughter.

The closing ceremony will be marked by the release of two prizes: the prize of the jury and the wink of Inwi.