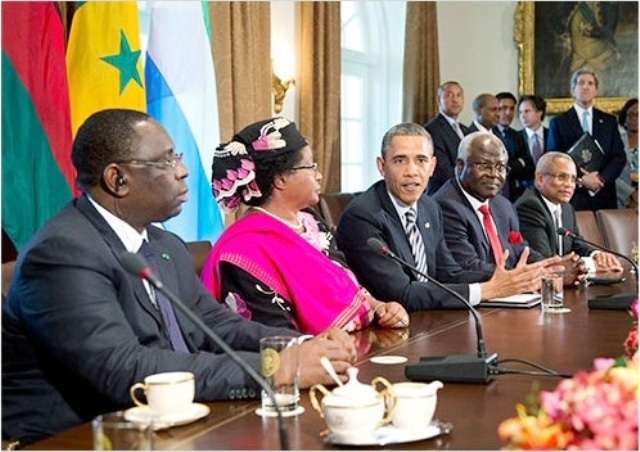 On the invitation of Barack Obama, 47 African Heads of States will participate in a summit on the next 5th and 6th August in the White House.

This summit is organized within the framework of the strengthening of the links between both continents. In other words, it is a question for the United States of America of « strengthening the American diplomatic presence in Africa« .

According to Jonathan Lalley, a spokesman of the White House, the meeting will make progress the administration objectives regarding business and investment in Africa and will highlight on the commitment of the United States to the safety of Africa, the development of the democracy and its inhabitants.

In the list of countries absent for this invitation, appear: Zimbabwe, Sudan, Guinea Bissau, and also Egypt and Madagascar.

In a communiqué, the White House underlined that these countries are a part of those « not having good relations with the United States or are suspended by the African Union« .

The principle of this summit was acquired since Barack Obama African tour of the last June.

Born in the United States of an American mother and a Kenyan father, Barack Obama launched the idea of this summit in the end of June 2013 during the South African sector of a tour that also led him to Senegal and Tanzania.

During a speech in the Cape, he wished « the opening of a new chapter in the relation between the United States and Africa » By announcing this summit, the first of this kind.

In front of the emergence of China and some other emerging powers, the economic advisers of Barack Obama exhorted him to strengthen the American diplomatic presence on the continent.

In the beginning of his tour, Barack Obama however tried to minimize rivalries between foreign investors in Africa, considering that there was no current « Cold war » on the continent.