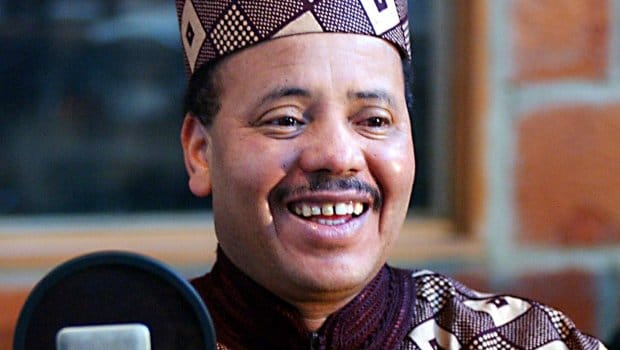 The famous Moroccan musician, Majid Bekkas was recently awarded the Académie Charles-Cros Prize in Marseille. Creator of « L’Africain gnaoua blues« , form of musical expression deriving from the spiritual music of trance Gnaoui, mixed with jazz and blues of African origins, the artist was rewarded for « Al Qantara« , his last album in trio which intends to connect nearby civilizations.

In fact, having collaborated with the Senegalese, Ablaye Cissoko, Kora player (21 string harp-lute), for the album « Mabrouk » more than two years ago, this time, it is a co-production between three that Majid Bekkas wanted to record, staying faithful to his multicultural intentions expressed moreover by the name of this new project: « Al Qantara« , meaning « the bridge« , in Arabic.

Thus recorded with the Belgian, Manuel Hermia (Indian flute, saxophone and clarinet) and the Moroccan percussionist, Khalid Kouhen, this album is inspired by a Morocco considered as a crossroads of civilizations, a land rich in traditions and cultures, having stood out with its imprint the History of Africa, the East and the West.

Stemming too from the successful interbreeding between the African and Arab-Berber cultures, Majid is a Gnaoui artist and intellectual initiated to the Gnawa culture or « Taghnawite » by the great master, Ba Houmane, who taught him the background of this art. He lives at present in Salé and exercises his job in Rabat as music teacher at the Academy.

He is also the art director of the Oudaya Jazz Festival of Rabat since its creation in 1996. This festival is financed by the European Economic Community and kept for the European jazzmen.

The Gnaoui music is of oral tradition passed on from master to follower because the first Gaouis were often illiterate. The taking back of the « Tagnawite » mantle by Gnaoui intellectuals as Majid Bekkas, mastering this oral tradition as well as the backgrounds of the universal music, allowed at the same time a maturity of this music and its connection with other musical styles as jazz, blues, or flamenco…

« It is fair that the History to keep the name of Majid. His charisma on stage, his sensual Gnaoui singer voice and his virtuosity in « hajhouj », capable of bewitchment and trance, make of him the deserving representative of the Gnaoui culture stemming from the interbreeding of the ancestral musical heritage, Arab-Berber and African with Sufi or sacred mystic tendency« , underlined Hassan Mégri, CEO and founder of the National Committee of the Music of Morocco (CNM).