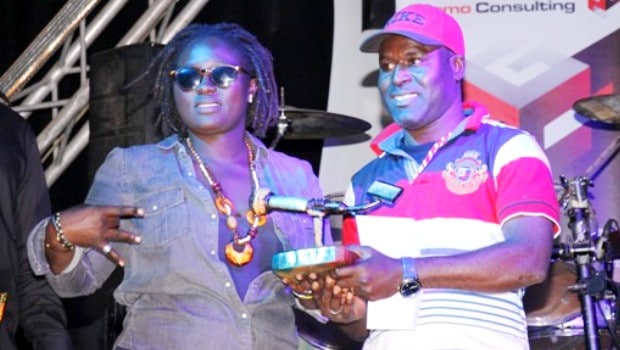 The female artist Toussa honored women by winning last Saturday in Dakar during the second edition of Top Awards, the best Mixtape trophy of the year 2014.

The event was organized by DJ Lamay Sène’s Bagn Lal label production. In front of professional artists whose talents are unequivocal (Dip Doundou Guis, Seven Shot, Profète and Ngaka Blin D), the woman in dreadlock, arrived at the top of a competition strongly desired.

She was chosen thanks to the quality of her work which was very well appreciated by the members of the jury, and also by the number of vote from her fans, established in Senegal and almost anywhere else worldwide.

Apparently very moved, the artist appealed her pairs to a sacred union around the Hip-hop movement. She thanked her fans and promised to work twice as hard in order to win other consecrations.

The proud look, « Sister Toussa » as she is affectionately called in this environment where men always imposed their rule, is not surprised at all by the results.

« I do always believe in me » she said. Appreciating DJ Lamay Sène’s initiative, the artist with ebony skin suggested that « Senegal needs similar initiatives« .

According to the artist, to boost the Hip-hop « requires promoters of shows and healthy competitions also, just like Top Awards; the rap would only go better« .