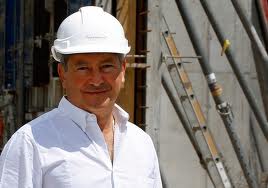 Alami Lazraq: the Moroccan architect that has become builder and great collector!

It is one the African greatest success. The Moroccan Alami Lazraq, the boss of the Moroccan group Alliances, built a real estate empire over the continent. When he has time, he dedicates himself to his other passion, contemporary art. His dream: open in Marrakesh a museum dedicated to Moroccan and African contemporary art of a surface of 6 000 m2 and for a cost estimated at 20 million euros. Inauguration is planned for 2016.

This passion for art, he is sharing it with his wife Farida. The couple is well known by African artists as the Beninese Romuald Hazoumé, the Congolese Darling Samba (DR Congo) or the Ivorian Frédéric Bruly Bouabré. « I am convinced that art is a part of social contract. Contemporary art follows modernity in Morocco. It thus seemed obvious to me to create a foundation that contributes to the development of culture of my country. »

Enthusiastically, he quickly added: « honestly, I never thought of making a company collection. At first, I bought items for myself, and when the company started making money, I began to buy for it »

He is said to have possessed 500 « essential » works of Moroccan and African art. He is also interested in Chinese contemporary art. « Some people may say themselves that I become crazy. Nobody obliges me to do it, but as I do not imagine of selling even a single work, and as I cannot display them all, I thought of a museum. It is a duty to participate in the cultural development of my country. »

The career of this architect, who introduced his company to the stock exchange of Casablanca in July 2008, is amazing. He is today among the 50 biggest African fortunes listed by the American magazine Forbes! He began his career as head of studies at the ministry of Habous and Islamic Affairs (1976) then he was a managing director of the regional institution of development and building of Marrakech-Tensift (1978), then he became manager of North African Omnium real estate pole (holding royal, meanwhile renamed SNI)

He created his Alliances group in 1994; he succeeded in arranging an agreement of exclusivity with Risma, a subsidiary of Accor group. Twenty years later, Alliances group became a diversified empire: hotel business, real-estate development, social and intermediate housing, public works …

At 63 years old, he does not think of retiring himself! His fame and his experience still open him more perspectives: « Moroccan expertise is really needed ».

And he then specified: « why Africa? First of all, it is the continent of future. Everything needs to be done there. The Alliances group was planning to go there long time ago. Moroccan banks are already well settled there and constitutes a relay of choice for Moroccan investors. We realized that in Africa, there is a need mattering in social housing. All countries applied, except that there are no opportunities of financing buyers on long term. The need is not felt only at the level of the social housing, but also at the level of other segments, especially at the level of infrastructures. It is the reason why we are interested in it a lot. We began with Ivory Coast, country from which government requested us. Then, there is Nigeria which is an enormous market, then the Gabon. »

An entrepreneur that has not stopped making talk about him…