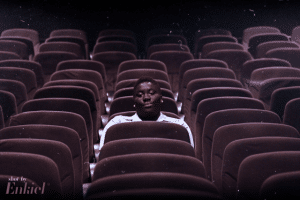 She is a native of Congo Brazzaville and she lives in Paris but she is fascinated by African cinema and particularly more by Nollywood.

Chloé Malanda published an investigation on cinematographic industry in Nigeria, Nollywood then.

For the fulfilment of the idea of this investigation, she attended NollywoodWeek Paris 2013, festival during which she collaborated with several directors.

In her fascinating work, Chloé Malanda alias Aset is also interested in actresses and actors as well as in wings of the production and the business that represents today what we should well qualify as industry.

There are almost as many as movies produced in Nollywood every year as in Hollywood. She also studied the phenomenon that touched Ghana, Ghallywood or Ghollywood.

What made her say: « A phenomenon was born in this part of the world. Its name is Nollywood. The cinematographic art in African new and free point of view »

The French version of his work will officially come out on the 4th April 2014.

We can of course buy it online on Amazon

Kindly visit his site.
She can be joined on Facebook.

Chapiter II
Nollywood: Success that is ruling and inspires respect

Chapiter V
Nollywood or entrepreneurial revolution: the case of iROKOTV

Chapiter IX
The rising stars: Some directors of Nollywood and Ghallywood

Chapiter XI
The rising stars: Some actresses, actors of Nollywood and Ghallywood”