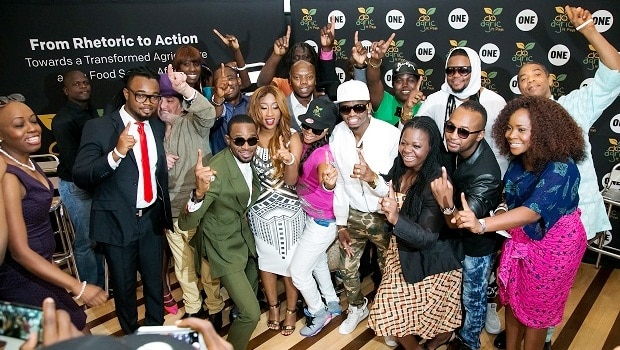 It always pleases to see African artists making a commitment for noble causes in order to take out the continent from poverty.

In order to support the campaign « Do Agric. Agriculture that pays » that aims at re-revitalizing investments in agriculture, about twenty famous musicians coming from 11 African countries collaborated together on a song titled « Cocoa ‘na Chocolate« , realized in partnership with the ONE.org NGO.

We should note that the song and the clip were recorded in Johannesburg, South Africa.

Through this song, the artists raised their voices in order to mobilize the young people and ask them to join ONE.org and support the « Do Agric » campaign.

Launched last January, the campaign invites the member leaders of the African Union to dedicate at least 10 % of their national budgets to effective agricultural investments through transparent and responsible budgets.

The campaign particularly asks the Heads of States and government to adopt better agricultural policies that will allow to create jobs for the youth, give a better support for the small farmers, revitalize the productivity, diversify the agricultural values chain and contribute to bring millions Africans out of the extreme poverty.

The song « Cocoa ‘na chocolate » aims thus at showing the importance of agriculture for the future of Africa and for the fight against the extreme poverty.

« These popular artists made a commitment beside ONE.org, to tell to the young people that not only agriculture is « trend » but is also a good means of making a living. But in the absence of a strong political will and a support of the largest number of citizens, the African youth will not be capable of enjoying the potential of agriculture« , underlined an information note.

« This is why ONE.org and the most popular African voices joined together to tell the African leaders, investors and the young people: Do Agric, agriculture that pays« , stipulated the document passed to the press.

For D’Banj, agriculture is the only cause for which African musicians have to make a commitment.