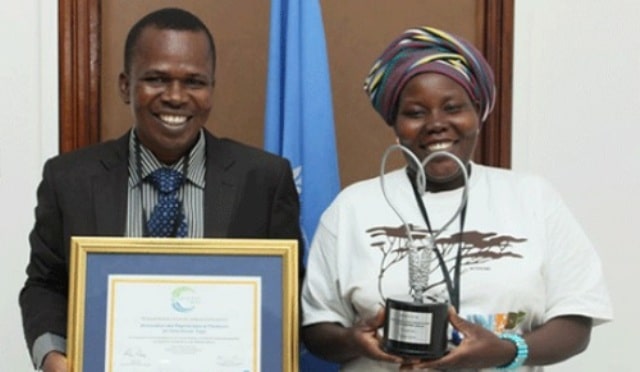 For the second consecutive time, Togo draws attention by appearing among the 35 prize-winners of the Equateur Prize 2014.

This thanks to the association of the nursery gardeners and the planters of the West Tône called « Songou-Man » (which means the shadow is good in the local dialect) based in the far northern part of Togo, rewarded this year for its actions in favor of environmental protection through the community participation for the conservation of the ecosystem.

The persons in charge of the association (picture) travelled to Nairobi (Kenya) where, as eleven other prize-winners, they were rewarded.

Other prize-winners will be rewarded on the coming 22nd September in New York during the Summit on the climate initiated by the General Secretary of the UNO.

Kindly note that in 2012, it was the community of Ando Kpomey, a small locality situated in the south-west of Togo that was rewarded by the Equateur Prize 2014 for the conservation and the rational management of its forest within the framework of the Summit Rio + 20.

During the presentation of the prize to the Togolese authorities, Kouman Boulene, the executive director of this association created in 2002, indicated the following: « By protecting our lands by the reforestation and the conservation of community forests, we solve the problem of wood that is recurring here and slow down the erosion of our lands in order to produce better« .

As for Mrs Damtoti Sambiani, she said to be « very satisfied that our work can be appreciated outside the country. It gives us some more encouragement to forge ahead for the greater well-being of all the community« .

This prestigious prize is created to rewarded the innovative approaches of sustainable development and the community actions in front of the challenges connected to environment, poverty and climate change.

The Equateur initiative includes the UNO, governments, the civil society, university institutions and community organizations, and since 2002, has been rewarding exceptional local efforts for fight against poverty by environmental protection and sustainable exploitation of the biodiversity.