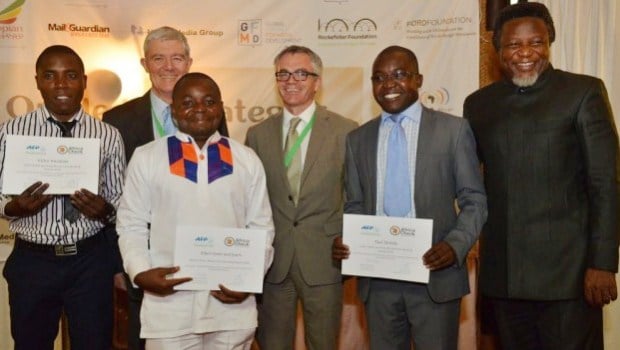 Gold against water in Ghana: an incredible discovery!

The Ghanaian video director, Edem Srem is in seventh heaven. He and his MultiTvWorl team have just won the very first African Prize for the check of facts, created and sponsored by AFP Foundation.

This, through a video knuckle-duster: « gold against water in Ghana« .

The video denounces the false declarations from the government indicating to have stopped the dangerous practice of gold exploitation from alluvial deposits in this country of West Africa.

The second two prizes were awarded to Paul Shalala, from Zambia National Broadcasting Corporation, for an investigation on the impact of investments by multinationals that practise the extraction on food safety of the country, and Victor Amadala, Kenyan journalist, to have dismantled a superstition according to which parents in his country have to make remove the teeth of the newborn children, on kenyakidz.com site.

We should note that the winning team will receive a prize for 2000 euros and each of the second prize winners will receive 1000 euros.

« I am very honored for myself and my team to have won this prize for this work« , declared Edem Srem.

The CEO of France-Presse Agency and chairman of AFP Foundation, Emmanuel Hoog, considers for his part that « these young African reporters defend the greatest values of journalism« . « They also help to promote virtues of opening and transparency in public affairs« .

AFP foundation, an organization that provides trainings to journalists of developing countries, launched in 2012 the first independent project for the check of facts on the continent.

Since its creation, tens of inquiries and reports were published on subjects going from false medical remedies to the impact of electricity prices on poor people, or to that of the control of firearms related to murderer rate.