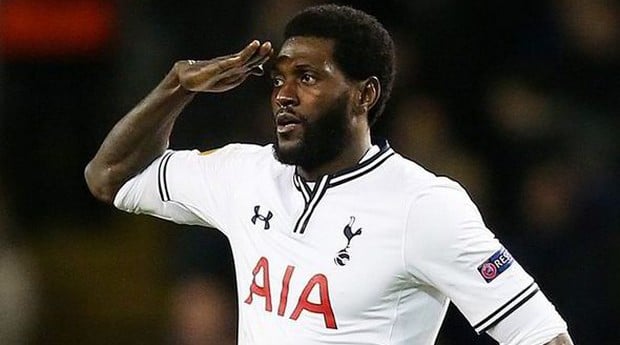 The Togolese international footballer and striker of Tottenham, Sheyi Emmanuel Adebayor is listed among the richest 100 celebrities in the world according to the ranking 2014 by the American magazine, Forbes, with 6,5 million euro annual income.

It was in 2011 when he joined Tottenham, at first borrowed from Manchester City before a definitive transfer since the summer 2012. Adebayor recently played his 100th match with Spurs by summing up 41 goals. He intends to score many others for this team.

His career path in the national team was marked by his participation in the World cup 2006. He will not participate in the African Cup of the Nations 2010 because of the shooting of which the bus of the Togolese team was the target, a shooting during which two members of the delegation were killed at the when the bus arrived in the enclave of Cabinda, Angola.

Being « haunted » by these tragic events, Emmanuel Adebayor announces on 12th April 2010 his international retirement.

But after several negotiations, it agrees to come back into the national team and replays against Guinea-Bissau on 15th in November 2011, a match mattering for the eliminating heats of the world cup 2014; a match that ends up with the victory of Togo (1-0).

Born on 28th February 1984 in Lomé, Togo, Sheyi Emmanuel Adebayor starts playing in Togo within the junior club of his area, the Sporting Club of Lomé at Nyékonakpoé.

After his training in France at FC Metz, he is launched at the age of 17 years old in the League 1 by Gilbert Gress. But it is in League 2 that he really emerges where, during the season 2002-2003, he scores thirteen goals.

In January, 2006, he leaves for Arsenal in England. He will leave Arsène Wenger’s team for Manchester City, then Real Madrid before landing at Tottenham Hotspur.

Taller (1,93 m), this player is known for his technical talents and mobility.

His stays in his native land are opportunities of exchanges between the player and the young generation that longs to raise later and very high the national flag.

The one that is nicknamed Adé or SEA (the initials for Sheyi Emmanuel Adébayor) is moreover the manager for a foundation called « SEA Foundation ».

Launched on 29th June 2012 in his private residence in Accra, Ghana and one year later on 30th June 2013 in the Togolese capital town, the SEA foundation has for objective to help the disadvantaged populations, particularly children in exclusion situation in Togo, Ghana and in other countries of the sub-region.