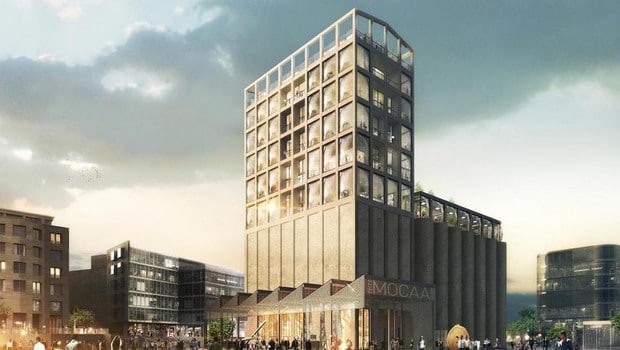 The biggest African museum of contemporary art will be opened in 2016 on the Cape Town, South Africa. The Zeitz MOCAA place of interest will be set up near the wharf of the former Robben Island where the South African former president Nelson Mandela was poisoned.

The new museum will gather the contemporary arts of Africa scattered over the European and American continents. Zeitz MOCAA will have a surface of 6 000 m² and will be endowed with educational centers for children and young curators. It will also be equipped with shops, bookshops and cafeterias. The building work site is estimated at 500 million rands (34 million euros) according to RFI.

The nine-storey building is given to the British architect, Thomas Heatherwick, the author of the Olympic bowl of the Games of London 2012.

« The market is rapidly expanding. Artists of Africa participate in all the big biennial events; the big gallery owners and the collectors are interested in the artists of Africa« , specified Mark Coetzee, managing director and curator of the future Museum of contemporary art of Africa, Zeitz (Zeitz MOCAA).

Mark Coetzee is delighted at the realization of this ambitious project. For him, Zeitz MOCAA is unprecedented on the African continent. « I think that when the works will be finished, you can say that this will be the biggest museum in Africa and all over the world that emphasizes on the practice of the African contemporary art« , he confirmed.