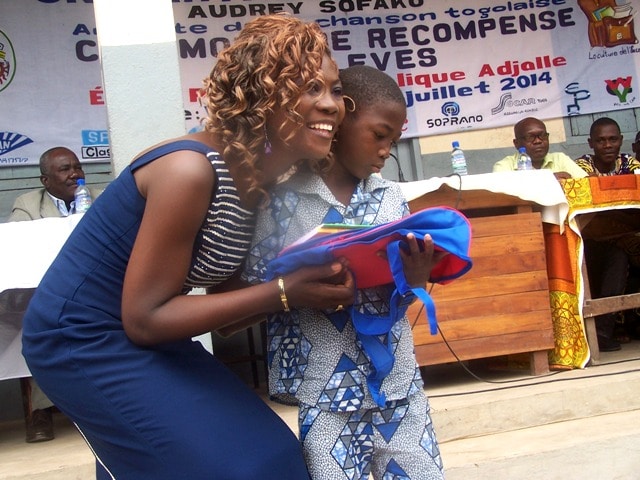 As last year, the Togolese artist of music, Audrey Sofako rewarded on Friday in Lomé, the best pupils that were successful in their primary school certificate (CEPD). This reward also included the best pupils from form one to form 6 of the school groups A, B and C of Adjallé primary school (EPP Adjallé) by offering them school supplies (school bags, didactic materials, books, pens etc.)

There are on the whole about sixty pupils who benefited from this donation of school supplies that will help them for a better school re-opening scheduled within the next months.

This action is within the framework of an ambitious project: « a schoolbag for Elie« , launched in July 2013 and aiming « at promoting the culture of excellence in pupils in the schools of Togo« .

The reward ceremony of these school kits took place in the presence of parents, friends, and heightened by the representative of the Minister of the primary and secondary education and the elimination of illiteracy as well as the partners that support this project.

The best teachers of the aforementioned school were also rewarded for their efforts granted during the academic year.

In her speech, the diva of gospel music, specified that the project is to support to the efforts of the government in its vast program of « quality education for all« .

For the latter, « the most beautiful gift a parent can offer to his child is to assure him a good education« .

« With this project, we want to exhort children to study and hardworking, to the culture of excellence, to the self-abnegation attitude because today, these pupils have more means to succeed their studies« , underlined Audrey Sofako.

Within the framework of the project, the artist singer periodically organizes talks-debates mainly intended to learners; meetings during which the latter are made sensitive on the troubles that slow down their school blooming.

Besides, the diva of the Togolese gospel music exhorted the parents to inculcate to their children love and motivation of lessons received at school and to be in good terms with their teachers.

She moreover drew the attention of all on the TV programs on the national and international level as well as on social networks.

The promoter of the project thus called on the responsibility of parents, authorities as well as pupils.

This artist was proud to be back to her people. As reminder, Audrey Sokako followed her primary school studies at this school (EPP Adajallé) until obtaining of her certificate, CEPD. The current Prime Minister was also a pupil at this school.