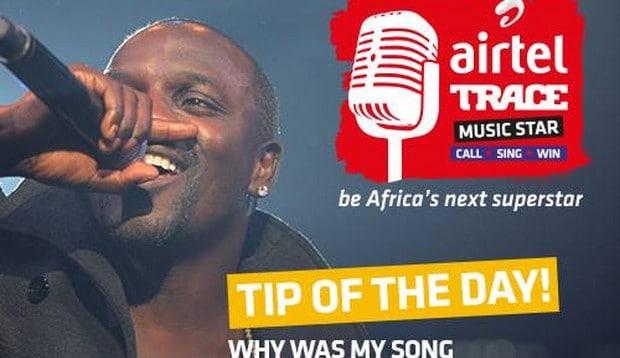 Trace Tv and Airtel group offers a golden opportunity to budding artists from 13 countries of Africa. A single phone call can make of these music lovers, stars thanks to the phone competition called Airtel Trace Music Star.

Airtel Trace Music Star game is the first one in Africa. The competition allows Airtel subscribers to be marked by singing in their phones. No more need to be submitted to the casting testing exercises. Candidates can improve their scores by participating repeatedly in the game.

The prize-winners of the national phases will participate in great final planned in March 2015. The winner of this ultimate stage will take the juicy 30.000-euro envelope. He will also benefit from a stay in United States of America where he will have chance to be coached by the American star of Senegalese origin, Akon, in addition to the recording of an album at Universal Music.

In order to assure the success of the competition, Trace Tv has just signed an agreement with Mahindra Comviva. The world leader in the supply of mobile equipment will provide to the candidates, mKaraoke, a digital platform of the latest generation.

« We are happy to join Mahindra Comviva to provide a platform intended to valorize young people. This initiative came into being thanks to the exceptional expertise of Mahindra Comviva regarding digital music, its VAS technologies and its excellent knowledge of the African market« , indicated Olivier Laouchez, CEO of Track Tv quoted by APO.