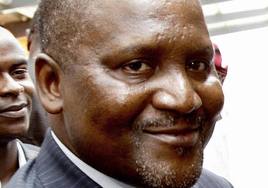 Aliko Dangote : a fortune of 25 billion dollars ! The 1st African listed among the Top 25 billionaires!

His fortune that was estimated at 12 billion dollars in November 2012 became more than two times higher in eighteen months!

The businessman, who is 56 years old, was the first African to have reached the Top 25 in this annual classification.

Aliko Dangote was born on April 10th, 1957; he is not well known outside Nigeria but his great pride is to be « far richer than Oprah Winfrey ».

According to Forbes, it is the richest « Black fortune in the world ».

He built his success-story in full discretion. He is almost unknown on continental and international levels. He is said to be present in all Nigerian economic sectors – markets of sugar, cement, rice, pastas, textile, salt, transport (he is in particular a co-owner of an airline company). His name is also associated with oil and gas markets.

He started his career at the age of 20 years in 1977. His maternal grandfather, patriarch of a family who had a lot of success in business, lent him 500 000 nairas and offered him three trucks of 10 tons.

He started making fortune in cement business: because of its rarity, customers used to pay several months in advance. With a truck of cement, he could gain 1 400 nairas daily, and Dangote had four trucks.

In 1980, he settled down in Lagos, one of the biggest business moving plates in west Africa: « I discovered in Lagos where I could meet people who granted licenses of import-export ».

He also settled in Lagos in a complicated period: soldiers took power and put into prison all the big businessmen of the city, accusing them of being corrupted. It was the second help of the fate: Aliko Dangote got established on markets left vacant by the imprisoned businessmen. He launched into sugar and emerged in rice importation.

He sometimes got failure, as his investment in a bank that went bankrupt. He learnt from it and henceforth, he will only concentrate on business sectors he knew well.

A travel into Brazil in 80s gave a new boost to his projects: « I thought that Brazil and Nigeria were more or less at the same level because at that time, it was said that Brazil was a very due nation. But when I went there, I discovered a massive industrialization. Unbelievable. I then started thinking of how come there is such a development of industry in Brazil and not in Nigeria. On my return, I decided to launch into industry.  »

He thus built a sugar refinery, started making packagings for pastas of which he was one of the importers. Very quickly his projects of investment reached 10 billion dollars (including in particular, the construction of an oil refinery of 300 000 barrels daily, a power plant of 5000 megawatts).

He never wanted to do politics even if Aliko Dangote has his people at the highest level. He financed the party of Olusegun Obasanjo in 2003 (200 million nairas or 1, 16 million euros) and the project of presidential library.