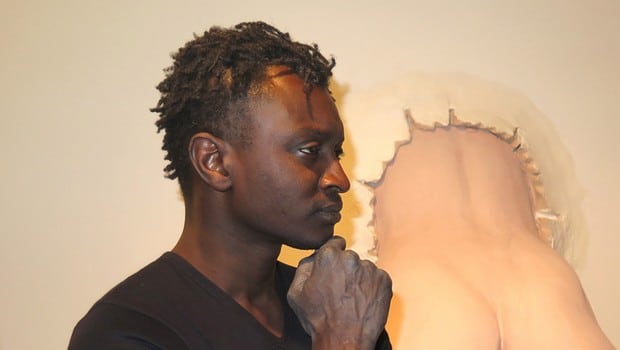 Diadji Diop: the Senegalese sculptor, specialist of the red and the giant

Diadji Diop did not achieve his childhood dream, the one of becoming an architect. Instead of desinging buildings, the Senegalese « designs Men » with clay. His works are known all over the European museums and are in the foreground of the Cité nationale de l’histoire de l’immigration (Paris).

Born in 1973, Diadji Diop lived a happy childhood in the care of a father inspector of banks and a mother senior official (UNDP). « I have been drawing since the time I was capable of holding a pencil (…) I started by imitating great heroes, always with the same passion for the realistic feature« , he declared.

The story of the young Senegalese took another form at the age of 13 years old when his father died. Very affected, he filled the space left by the death of his father by creating fictitious personalities in comic strips and animated cartoons. After his high school diploma in 1992, he joined the School of applied arts where he discovered the giant sculpture.

He successfully participated in the competition of the Fine arts of Paris and henceforth devoted himself to sculptures. « For the examination, I decided for my first time to work the red, a color that will become a real material and that I have been almost systematically using since then » explained Diadji Diop.

In 2009, the works of the Senegalese artist were displayed in the gardens of the Élysée then at the Museum of the history of immigration since 2011. Diop has carried a rather critical look on the biennial event of contemporary art of Dakar. « As long as it will be centered on the work of Africans, even if that starts from a good feeling, it will only give the image of second-rate artists », he specified.