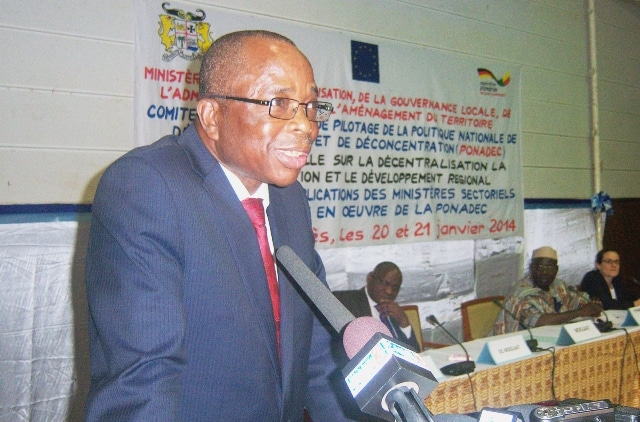 Started on 11th August, the works of the 3rd ordinary session of the African Ministerial Conference on Decentralization and Local Development (CADDEL) came to an end on 15th August 2014 in Cotonou, Benin. Meeting at the end of which, the Minister for Decentralization, local governance, administration and town and country planning, Isidore Gnonlonfoun was appointed to occupy the presidency of the conference for the 2014-2017 mandate.

It is necessary to underline that these five days were full of exchanges, analyses, proposals and recommendations.

Immediately elected, Mr. Gnonlonfoun reassured the Caddel members that « he will do his utmost to make of this mandate also a success« .

« I shall try all my best in order to protect the numerous assets for this organization and to work twice as hard in order to meet the new challenges arisen in Caddel« , he promised.

The Beninese Minister invited all the same all the Caddel members as well as the traditional partners « to make a commitment so that the mandate of Benin becomes successful« .

He moreover appreciated the management of his predecessor, Carmelita Rita Namashulua, the Minister in charge of Administration and Decentralization of Mozambique.

« I hope I can count on your usual commitment and your availability in order to capitalize your rich experience and assure success for the mandate that started on Friday, 15th August 2014« , he challenged towards his predecessor.

The very new president of Caddel did not miss to praise the friendly atmosphere that prevailed throughout the meeting of Cotonou.

Outside the « Africités » second edition that was held in the year 2000 in Windhoek, Namibia, the CADDEL was created by the Ministers in charge of this sector in order to promote decentralization and local governance within the member States.

This initiative was reaffirmed three years later in 2003 during the « Africités » 3rd edition of Yaoundé during which Cameroon was appointed to preside over the fates of the CADDEL.

Two years later in October 2005, another meeting of Ministers was held in Yaoundé outside « Africités ».

The latter gave rise to the Declaration of Yaoundé through which Ministers made a commitment for their States to promote decentralization.