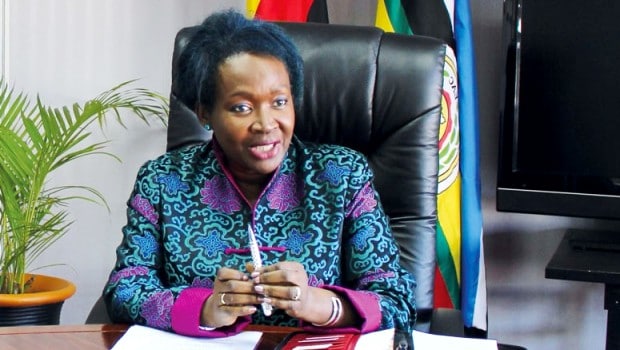 Africa was in the spotlight last 17th April in Washington, the USA. Besides the Senegalese Head of State, Macky Sall, and the outgoing chairman of the ADB, Dr. Donald Kaberuka, Maria Kiwanuka, the Minister of Economy, Finance and Planning of Uganda and Special Senior Adviser of the Head of State, received for her part the « African Patriot Prize« .

It was on the occasion of the IMF Summer meetings jet of the World Bank.

During this ceremony, Mrs. Whitaker praised the professional qualities of the honorable lady, Maria Kiwanuka.

Apparently moved, she defended girls and women by underlining that « in order to develop, Africa should not ignore this category of the population« .

We should remind that several African and American personalities among whom Ministers, Ambassadors, Senior officials, Parliament members, Businessmen and Artists attended the ceremony that took place in premises the Council of Foreign Relations.

Born on 12th May 1955 in Kampala, the capital of Uganda, Maria Kiwanuka is an economist, a businesswoman and a politician who served as Minister of Finance in the office of Uganda from 27th May 2011 to 1st Mars 2015. Main adviser since 2015, she was the right hand of the Ugandan president regarding financial questions and she was in charge of the Bretton Woods institutions.

Maria Kiwanuka is married to Mohan Kiwanuka, the managing director of the Oscar Industries Limited. In 2007 or 4 years before being appointed Minister of Finance, her husband was listed as one of the richest people in Uganda.