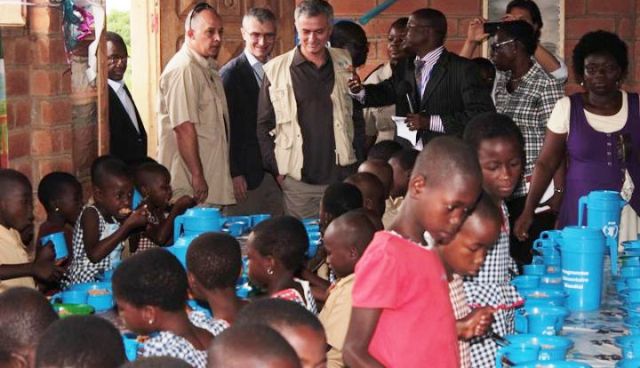 New ambassador of the World Food Program (WFP) against hunger since last May, Jose Mourinho, the trainer of Chelsea, wants to make a commitment for the organization by making known the work of the WFP and by supporting the Zero Hunger Challenge.

He belongs to the WFP ambassadors’ team that includes the actress Drew Barrymore, the singer Christina Aguilera and the football player Kaka.

Jose Mourinho, thus went to Ivory Coast in the beginning of the World cup to remind the profits of a good nutrition in the life of the young children.

During his first travel as ambassador of the WFP against hunger, Mourinho visited a school in Yamoussoukro where children receive free daily meals within the framework of a WFP.

« Food is a magnet for these children; it encourages them to stay at school, helps them to concentrate on their lessons and gives them nutriments they need to live a healthy life« , declared Mourinho after his visit to Nanan primary school in the suburb of Yamoussoukro.

He added in these terms: « WFP is available for these children, may it be in Ivory Coast, Syria, South Sudan, or in any other region of the world where access to healthy and nourishing food is a challenge ».

WFP works in partnership with national governmental and non-governmental organizations in Ivory Coast and supplied a food aid throughout the recent civil conflicts and the periods of insecurity.

« WFP food aid helped to save lives during the years of civil conflicts here in Ivory Coast and now that the country is recovering peace, WFP plays a so essential role by guaranteeing stability and future development », asserted for his part, the director of the WFP, Gianluca Ferrera.

« José Mourinho’s visit is extremely important because it helped us to draw attention on Ivory and to show the progress we realized these recent years while reminding that much work remains to be carried out », added M Ferrera.